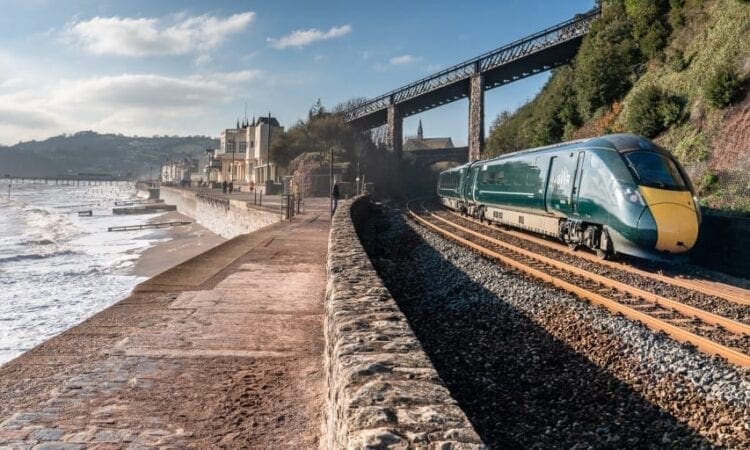 Long-distance trains will run on battery power in a UK first, manufacturer Hitachi Rail has announced.

The firm has launched a plan for Great Western Railway (GWR) services between London Paddington and Penzance, Cornwall, to operate by a combination of electricity, diesel and batteries.

The line is only partially electrified, with the majority of the 300-mile route requiring diesel power.

Thirty-six Intercity Express Trains currently used for the journeys are bi-modes, which switch between electric and diesel power.

Developing tri-mode trains will take place in partnership with train owner Eversholt Rail and involve replacing diesel engines with batteries. Testing is expected to begin in 2022.

Using battery power for travel in and out of the route’s 15 non-electrified stations – such as Exeter St David’s – and other urban areas will reduce fuel consumption by more than 20%, improve air quality and reduce noise levels, according to Hitachi Rail.

The manufacturer said it will be the first time a long-distance passenger service uses an alternative power source in the UK.

Hitachi Rail hopes to roll out the technology and develop a fully battery-powered intercity train by the late 2040s.

Jim Brewin, who leads the firm in the UK and Ireland, said: “This partnership is an exciting opportunity to unlock new greener trains for passengers, reduce running costs for operators and cut carbon.

“At Hitachi Rail, we share the UK’s ambition for a net-zero emission future. Britain is in a unique position to become a global leader in battery trains. We want support the UK’s green economic recovery and levelling-up.”

Eversholt Rail chief executive Mary Kenny said: “We are delighted to continue working in partnership with Hitachi to investigate the conversion of our Class 802 fleet to tri-mode by introducing battery technology.

Rail Minister Chris Heaton-Harris said: “This is an exciting partnership to develop technology that can make rail travel more sustainable across the UK’s network.

“Battery-powered trains will support us in our battle against climate change and poor air quality, and improve the overall passenger experience.

“As we continue to build back better, developments like this are major stepping stones towards achieving the UK’s 2050 net-zero emissions target.”

Only around 38% of Britain’s railway is electrified, according to latest Office of Rail and Road data.

Electrification work – which generally involves putting up electric wires – has been limited due to the cost.

Projects in South Wales, the Midlands and the Lake District were axed or downgraded in July 2017 by then-transport secretary Chris Grayling.

The decision came amid cost overruns on electrification schemes such as the Great Western route, where the original budget was exceeded by around £2 billion.