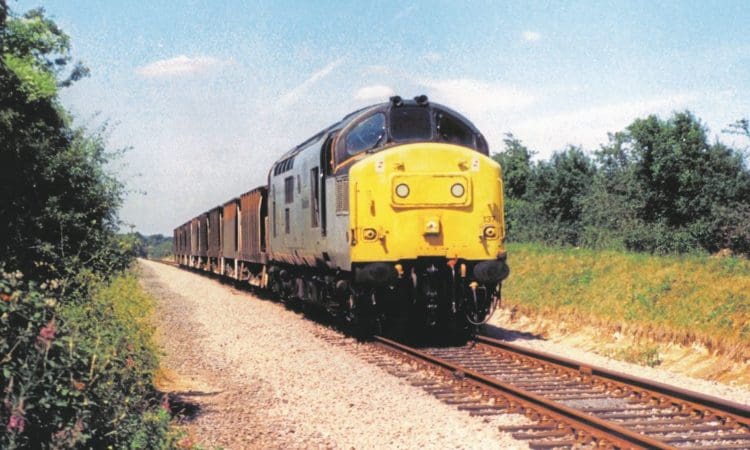 David Lindsell returns with final instalment of his three-part series covering the history of the Ludgershall branch. This covers other special trains, engineering trains and maintenance specials, redundant stock storage, and preservation, along with a report on a depot visit that took place in 1998.

This feature rounds off our in-depth study of the Ludgershall branch and follows on from the history of the route contained in the August 2021 issue of Railways Illustrated and the special trains feature in the December 2021 issue.

The Royal Train, with The Queen travelling on board, was stabled on the branch just to the north of Red Post Bridge on the night of February 21/22, 1991, with access to and from the train via the Red Post Lane foot crossing. Armed police were in attendance to protect the train while it was there. On February 22, the train arrived at Platform One at Andover station, hauled by 47834 Firefly, at 09.25 and departed for Gillingham, Dorset, at 09.35 behind 47835 Windsor Castle, with the other Class 47 following just afterwards. Both 47s, which were dedicated to working the Royal Train at the time, were immaculate in InterCity Swallow livery.

Unfortunately, the damp and drizzly weather conditions were far from ideal and pictures of the train did not come out well in the pre-digital age.

Two 4TC sets were removed from storage at Ludgershall on April 7, 1995, and these were taken to the RTC at Derby by 37377 for the removal of the trailer seconds. Now formed as three-carriage sets, they were subsequently worked by 33109 in top-and-tail formation, along with 33116, for filming between Annan and Dumfries in Scotland and later at London Waterloo for the feature film Mission Impossible.

During September 1995, 47298 Pegasus was used for crew training to Ludgershall and return from Eastleigh via Laverstock.

On September 26, 2003, Fragonset Railways moved Network Rail’s recently-acquired 73141 and a Mk.1 BG spares van from Derby to Ludgershall using ex-works 31454, which had been finished in a version of InterCity mainline livery. The Class 73 joined NR’s other operational EDs which were at Ludgershall.

56078 worked 0Z14 from Eastleigh to Three Bridges on February 18, 2004, passing Shalford at 08.20. It later worked 6Y44, the 10.03 Three Bridges to Ludgershall engineers train, routed via Redhill, Dorking, Guildford and Woking, arriving at Andover some two hours late at around 16.00, before returning to Eastleigh light engine.

On March 28, 2019, 66736 Wolverhampton Wanderers was used as a route learner between Bicester and Ludgershall and return.

Cable trains ran many times over the years from 2003, for the unloading of empty cable drums and the loading of full drums in a secure environment. For the purpose of this article I don’t propose to list them all; just those that did not use the ubiquitous Class 66. The Eastleigh trains were coded 6Y21 and those from Hinksey Yard were 6V39.

On October 10, 2003, two-tone green liveried 47488 took four Generator Vans to Ludgershall for use with the cable trains.

For a while, redundant electric stock was stored at Ludgershall before being taken away for component recovery and scrapping. On June 7, 1994, 3-CEP Units 1405 and 1406 were brought from Ramsgate Depot for storage at Ludgershall. Two months later, on August 19, 33109 pushed 4TC units 410 and 417 to Ludgershall for storage from Bournemouth Depot.

Five vehicles from the former Doncaster Test Train, which had been stored by FM Rail at Ludgershall, were removed by road to J. Hurst Scrapyard, Hurstbourne, on March 17, 2009, for disposal.

At one time there were three preserved Class 33s in store in Ludgershall Depot sidings – including the first preserved example, 33034, which was saved by Barry Evans in April 1990.

33056 was initially owned by the Type 3 Preservation Society from July 1992. Moved to the Churnet Valley Railway in March 1995, it was eventually cut up in July 2006 by Booths of Rotherham, meaning that none of the three preserved ex-Ludgershall Class 33s survive.

A joint Industrial Railway Society / World War Two Railway Study Group visit to Ludgershall Depot took place on October 19, 1998. Seven members of each group spent an enjoyable two-and-a-half hours being shown round by WO2 Jez Fordham, of 79 Railway Squadron, based at Marchwood in Hampshire.

After a talk on yard operations, safety procedures, and future army rail developments, members were shown around the sidings, which included many MOD(A) wagons (42 KWB/23 KFA) and four EWS vans. Internal Users on site were three wooden-bodied vans and a 1984-built German ramp wagon, which is still out of gauge and one of only two in the country. Also present in the Tidworth headshunt was 33034 and an FMA freight flat articulated set of three wagons.

The members were then taken on cab rides using blue Ruston 423 Cromwell and green Ruston 428 up to the Tidworth headshunt, the Tidworth Road level crossing, and the southern limit of operations at the end of the former station loop.

Ruston 422 was under repair in the shed. This shunter has been in preservation since 2011 and has recently been sold by The Lavender Line in East Sussex to an unknown buyer and remains in working order.

I would like to acknowledge the help of Michael Bennett, Stuart Calkin, Simon Lindsell, Dennis Rowland, Roger Smith, Garry Thornton, of the Six Bells Junction website, and The Railway Magazine archive for assistance with the compilation of these features.