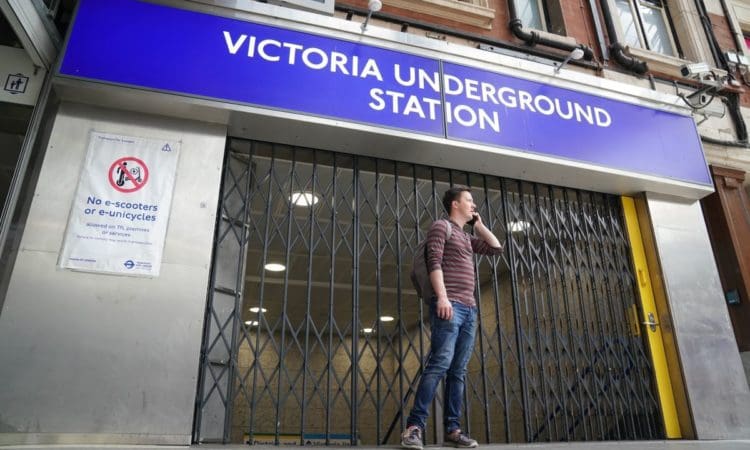 A strike by London Underground workers is disrupting travel across the capital.

Services on the vast majority of Tube lines are suspended, with a very limited operation elsewhere, according to Transport for London’s (TfL) website.

This has led to severe traffic jams as people use road transport to try to complete their journeys.

There is also disruption to bus services in west and south-west London and parts of Surrey due to a strike on Friday and Saturday by drivers who are members of the Unite union.

Sixty-three bus routes are being affected.

Mainline train services started later than normal on Friday due to the knock-on effect of Thursday’s RMT strike at Network Rail and train operators across the country.

Just 70% of services will run during Friday as a whole.

A further walkout on Saturday will reduce service levels to 20%.

Speaking at a picket line in Acton, west London, he said: “We’re out on strike today because we haven’t got an agreement from the TfL LUL (London Underground Limited) about the future of the pension scheme, which is under threat and, at the moment, there’s negotiations going on between the Government, the Treasury, and Mayor (Sadiq) Khan’s office about the future funding of London Underground.

“They’ve cut £2 billion from the funding and that has put at risk our members’ pensions.

“They want to decimate the pensions and change it into an entirely different, cheaper scheme, which will make all our members poorer in retirement and probably pay more while they are working.

He said he is “very sorry” that people are being inconvenienced by the strikes but defended the action, adding that the union has to show it is “deadly serious” about the livelihoods of its members.

Nick Dent, TfL’s director of customer operations, said it is “a difficult day” for travel in the capital, and “we’re advising customers not to travel on the Tube at all”.

Asked about the discussions with the Government, he told Sky News: “We of course conduct those negotiations confidentially. They are market-sensitive. We’ve explained that very clearly to the trade unions.

“But we have been working with all of the trade unions, including the RMT. We’ve been very open and transparent about the impact of the pandemic on our finances all the way through the last couple of years.

“We’ve assured them that we’ll continue to keep them updated.

“But, importantly, we have assured them that there are no proposals currently to change the TfL pension scheme, and if there were proposals in the future, then of course they will be consulted in detail.

London Mayor Sadiq Khan said: “The only reason for the strikes in recent weeks in London is because of the conditions the Government is trying to attach to a funding deal, and the trade unions are concerned about the consequences of those conditions on their members.

“This is about pension concerns that trade unions have.

“I don’t want these conditions imposed on our transport workers.”

Figures from location technology firm TomTom show a sharp rise in road congestion in the city on Friday.

The figures represent the proportion of additional time required for journeys compared with free-flow conditions.

Meanwhile, Transport Secretary Grant Shapps said railway reforms will be imposed if workers do not agree to new deals.

He told Sky News: “If we can’t get this settled in the way that we are proposing, which is ‘Please put the deal to your membership’, then we will have to move to what is called a Section 188; it is a process of actually requiring these changes to go into place so it becomes mandated.

“That is the direction that this is moving in now.”