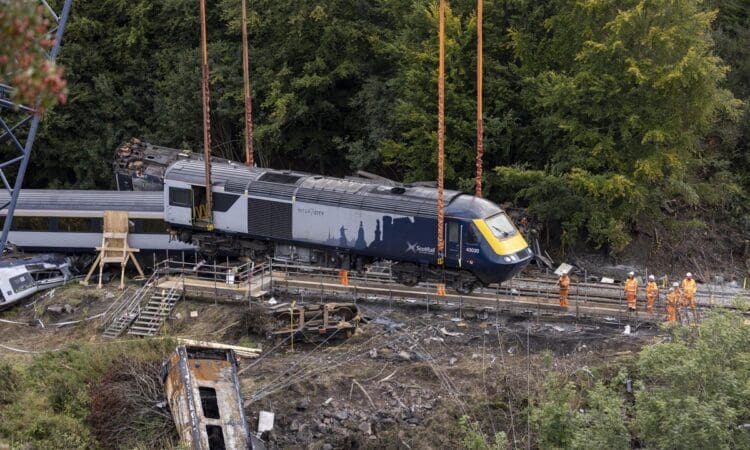 The findings of the investigation into the Stonehaven train crash are “damning” and must be “a watershed moment for rail safety”, according to train drivers’ union Aslef.

A series of failings were identified by the Rail Accident Investigation Branch.

Aslef general secretary Mick Whelan said: “This report is damning and makes for difficult reading, not least for the families of those who died and were injured.

“The failures identified in this report are so bad that we believe this must be a watershed moment in the way we ensure the safety of passengers and staff on our railway network.”

Kevin Lindsay, Aslef’s full-time organiser in Scotland, said: “In the light of this damning report, we have made a number of recommendations and demands.

“Never again should our drivers be working on trains where the crashworthiness is not fit for purpose, and on track and infrastructure not designed to withstand the consequences of climate change and where repeated warnings about those effects have not been acted upon.

“Action must be taken urgently. If not, then we run the risk that this tragedy will happen again and again.”

The victims of the crash near Carmont, west of Stonehaven in Aberdeenshire, were driver Brett McCullough, 45; conductor Donald Dinnie, 58; and passenger Christopher Stuchbury, 62.

Mr Lindsay went on: “Network Rail and Abellio ScotRail failed the staff and the passengers who were on the train that crashed at Carmont and they must be held to account.

“This should start with Alex Hynes. Given his involvement in both Network Rail and Abellio ScotRail, his position is untenable, and he must resign with immediate effect.”

Mr Hynes is managing director of Scotland’s Railway, which is a group of Government and rail industry organisations.

Mr Lindsay added: “Network Rail and Abellio ScotRail must also be pursued in the courts.

“Carmont represents endemic corporate failure and, for justice to prevail, corporate homicide/manslaughter laws should be used to pursue Network Rail and Abellio ScotRail.”

Network Rail chief executive Andrew Haines said: “This report makes clear that there are fundamental lessons to be learnt by Network Rail and the wider industry.

“As well as expressing our deep sorrow and regret at the loss of the lives of Christopher Stuchbury, Donald Dinnie and Brett McCullough, it’s important that we acknowledge it should not have taken this tragic accident to highlight those lessons.

“We must do better and we are utterly committed to that.

“In the 18 months since the accident, we have inspected similar locations and drainage systems across the length and breadth of the country, and the added insight the RAIB has provided today will help us in our efforts.

“We also commissioned two independent taskforces led by world-class experts to help us better understand extreme rainfall events and how to better manage our cuttings, embankments and their drainage systems.

“We have invested tens of millions of pounds towards improving the general resilience of our railway and how we predict and respond to such events. But this remains a multi-generational challenge and there is still much to do.”

Neil Davidson, partner at law firm Digby Brown Solicitors, which represents injured passengers and the relatives of one of the people killed, said: “This is a damning report which highlights a catalogue of failures within Network Rail.

“The RAIB investigation clearly shows rail management had prior knowledge of several known risks – they were told to improve, yet still failed to act.

“This is the very definition of negligence and as a result people were killed or injured.

“It should come as no surprise that many now hope further action will be taken against Network Rail.

“Right now, as a bare minimum, those responsible for running and managing the railway need to swiftly provide survivors and families with the support they deserve while implementing all of the RAIB’s recommendations in full and without delay.”

Simon French, the RAIB’s chief inspector of rail accidents, said: “Although railway safety in the UK has been steadily improving over recent decades, the tragedy at Carmont is a reminder of just how disruptive and potentially dangerous Britain’s volatile weather can be.

“The railway industry needs to get even smarter about the way it counters this threat, and to better exploit remarkable modern technology that enables the prediction and tracking of extreme weather events such as summer convective storms.

“There’s also an urgent need for the railway to provide real-time decision-makers with the information, procedures and training they need to manage complex and widespread weather-related events across the rail network.”

He added: “It’s important for all of us in the rail industry not to dismiss this truly harrowing accident as a one-off event.

“The railway industry needs to think through the implications of severe weather on its infrastructure, whilst also looking to the behaviour of trains should they derail after striking obstructions such as washouts and landslips.”

“The RAIB is clear that the derailment was caused by debris washed out from a drain and onto the track, with failures in the specific drainage system installed by Network Rail in 2011/12 being a key factor.

“The majority of the RAIB recommendations relate to other parties but ScotRail will play its part fully in ensuring that safety lessons are learned.

“We are working closely with Network Rail and the wider industry to do everything possible to reduce the risk of something like this ever happening again.

“The way the industry responds to extreme weather incidents has already changed following the events of 12 August 2020 and a number of the report’s recommendations have already been implemented.”

Scottish Transport Minister Jenny Gilruth said: “While the RAIB report is very clear there was nothing about the way the train was driven which caused the accident, the primary cause – that Network Rail’s contractor did not construct the drainage system correctly – will add to families’ pain and sorrow.

“Three people dying as a result of the Carmont derailment was three people too many.”

She added: “The Scottish Government is clear – we cannot allow a repeat of the terrible Carmont tragedy.”