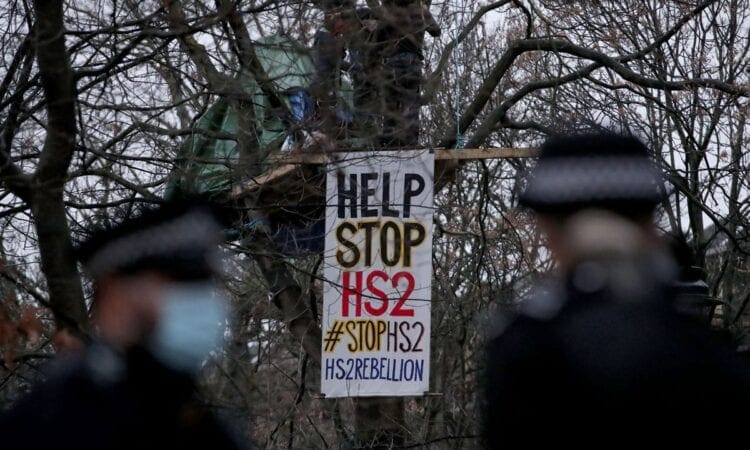 Shapps: HS2 will be critical ‘unless humans can teleport themselves’

Transport Secretary Grant Shapps has told a Transport Select Committee that the HS2 project will be vital for enabling people to meet each other unless teleportation becomes a reality.

Mr Shapps continues to back the high-speed rail project despite the collapse in demand for travel caused by the COVID-19 pandemic.

He told the Commons Transport Select Committee that “humans will always want to be in touch with humans” and HS2 will be vital “unless we think that people are going to be able to move around in some other form… teleport ourselves or some other way of getting around”.

Mr Shapps cited the pre-pandemic usage of the West Coast Main Line – originally built in the 1930s – as a reason why HS2 will be popular. Click here to see more.

Anti-HS2 protesters say they will stay in underground tunnels for as long as it takes even after a judge rejected a legal bid to halt efforts to evict them.

Environmental campaigners have spent six nights underground after digging a network of tunnels beneath Euston Square Gardens, next to Euston station in central London, and are prepared to sit it out for weeks despite an ongoing eviction process.

HS2 Ltd said it has “legal possession” of the land and urged protesters to leave “for their own safety” before they are removed by High Court enforcement officers. Click here to see more.

Captain Sir Tom Moore died in hospital this week at the age of 100, after testing positive for COVID-19.

The veteran, who raised more than £30 million for NHS Charities Together to mark his 100th birthday, died in Bedford Hospital on Tuesday morning.

After raising so much money for the NHS, the Captain had a Great Western Railway (GWR) Intercity train named in his honour. Five-car 800025 was named Captain Tom Moore on his 100th birthday in April. The naming followed requests from GWR staff and the general public. Click here to see more.

A “forensic focus” is required to complete Crossrail within its revised budget and timescale, an inquiry has found.

In a report, the London Assembly Transport Committee urged Transport for London (TfL) and mayor Sadiq Khan to ensure “past mistakes are not repeated”.

It recommends they keep a tight grasp on the project’s leadership structures and financial stability. Click here to see more.

Government want Eurostar survival ‘but will not lead the rescue’

The UK will not take the lead in rescuing Eurostar as it is majority-owned by France, a Cabinet minister has said.

Transport Secretary Grant Shapps told MPs that the Government is “very keen for Eurostar to survive” but insisted “it’s not our company”.

The cross-Channel rail operator revealed in November that it is “fighting for its survival” after suffering a 95% reduction in passenger numbers during the COVID-19 pandemic. Click here to see more.

The Government has defended the 2.6% rise in rail fares due next month.

Transport Minister Baroness Vere of Norbiton said the taxpayer has been “spectacularly generous” to the railways during the COVID-19 crisis. Click here to see more.

The Government is on a collision course with rail unions after revealing that pay rises for workers in the industry will only be considered in exceptional circumstances.

Unions said the decision is a “kick in the teeth” for frontline staff who have kept working throughout the COVID-19 crisis.

They have launched a campaign aimed at halting the threat of pay freezes and cuts to standards of living of rail workers. Click here to see more.

Victorian T9 No. 30120 to remain at Swanage Railway

The agreement will see the locomotive, built in 1899, stored at the Swanage Railway following expiry of its boiler certificate in August 2020.

Also, there are provisions for limited disassembly, including a boiler lift, for the Swanage Railway Trust to assess the potential for the locomotive to be returned to steam. Click here to see more.

Severn Valley Railway has announced that the railway will reopen to visitors for Easter.

From April 2, rail enthusiasts will once again be able to travel along the historic Severn Valley Railway. Mark space in your calendars for two special events in the first couple of months of reopening, which will appeal to heritage rail enthusiasts. Click here to see more.