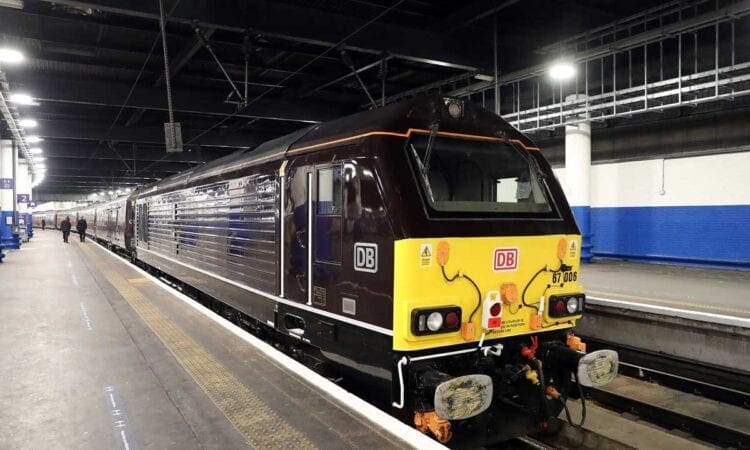 The Duke and Duchess of Cambridge are setting off on a festive morale-boosting tour around the country on the Royal Train.

Q: The royals have their own train?

A: Yes. The present Royal Train came into service in 1977 to mark the Queen’s Silver Jubilee, but the royal family have had their own dedicated train since Queen Victoria’s reign.

A: Take a look above. Its livery is a pristine, highly polished burgundy known as Royal Claret, emblazoned with royal crests, with black coach lining and grey roof. It has nine carriages – but not all of them are always used.

Q: What about the engine?

The royal train is pulled by one of two Class 67 locomotives – 67005 – The Queen’s Messenger and 67006 – Royal Sovereign, both decorated in royal claret livery. They are run on environmentally friendly bio-fuel made from waste vegetable oil.

Q: So it’s not pulled by a steam locomotive?

A: Only every now and then for special occasions.

Q: Were there engines called Prince William and Prince Henry?

A: Prince William and Prince Henry – named after William and his brother Harry – were a pair of Royal Class 47 locomotives which used to pull the Royal Train, but they were retired in 2004.

Q: Is the inside very luxurious?

A: Surprisingly not. The royal train is more functional than palatial and its furnishings are outdated.

Royal aides once described it as being fitted with bathroom fixtures “you could find in Homebase or B&Q” and the decor as “very G-Plan” which was popular in the 1960s and 70s.

In 2002, Buckingham Palace officials allowed journalists a rare glimpse in an attempt to destroy the perception that it was as lavish as the Orient Express.

A: Normally only the most senior royals – the Queen, the Duke of Edinburgh before he retired, and the Prince of Wales and the Duchess of Cornwall. The corgis used to accompany the Queen – and also the Queen Mother – onboard for journeys to Sandringham or Balmoral.

There is also space for royal aides and servants.

A: For official engagements, and for longer journeys around the UK such as to Scotland or Norfolk, especially when the Queen’s children were young.

It allows the royals to travel overnight and arrive rested ready to carry out a full day of engagements.

The monarch toured Britain on the train for her Golden Jubilee in 2002.

Q: Does the Queen have her own carriage?

A: Yes. It’s a private 75ft long air-conditioned and electrically heated saloon carriage which contains a bedroom with a single bed, a sitting room, a desk for working on the go, dining quarters – and bathroom complete with a full-sized bath.

Q: What about the other carriages?

A: The Duke of Edinburgh has a saloon carriage of a similar design but with a kitchen, green curtains, matching chair cushions and a brown carpet.

Scottish landscapes and Victorian prints of earlier rail journeys hang in both saloons.

Heir to the throne Charles has his own lounge car with a bedroom, bathroom and study with a small writing desk and a blue and white floral patterned sofa which matches the curtain fabric.

The other carriages include dining cars, a general purpose saloon for senior staff with sleeping quarters, a sleeping car for junior staff with bunk beds and a carriage for escort staff and maintenance workers.

Q: How often is the Royal Train used?

The cost – met by the taxpayer – has long been controversial and the train was nearly scrapped in 2013 when it was feared the rolling stock would have to be replaced. During the Golden Jubilee year of 2002, the train’s journeys cost £872,000.

Its service contract is also an additional £300,000 a year and it is maintained by the German firm DB Cargo UK.

Q: How much does it cost per mile?

A standard anytime rail ticket for the same journey at the time cost just £1.30 per mile.

Q: When was the first royal train introduced?

A dedicated carriage was built for the royal family in 1840, with the Dowager Queen Adelaide, the widow of William IV, becoming the first to ride in it.

Q: What about Queen Victoria?

A: Victorians believed that driving on fast trains could send you insane.

But Queen Victoria was finally persuaded to travel by rail in 1842 went on a 25-minute passage on the royal train from Slough to Paddington with Isambard Kingdom Brunel, who designed Great Western Railway, riding on the footplate.

The 23-year-old wrote in her diary that the journey was “delightful and so quick”.

By 1869, she had commissioned a set of private carriages, decorated in luxurious blue silk and 23-carat gold like a palace on wheels.