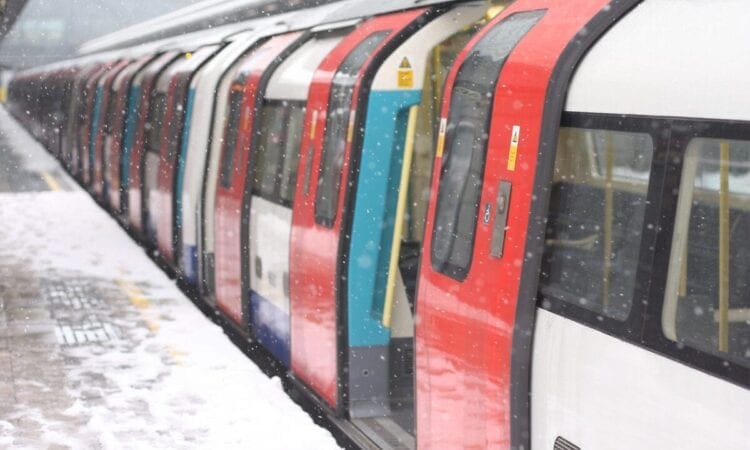 In years gone by the UK has faced some heavy snow; four years ago the Beast from the East brought parts of the country to a snowy standstill. Let’s look at how trains cope in snowy conditions, and what happens when they don’t.

Many rail commuters and travellers often ask the question: Why does snow stop trains running?

It would be easy to think that trains should be able to cope with intense weather conditions and snowfall – but this is usually not the case.

Rail operators work around-the-clock to make sure passengers travel as safely as possible; there’s no conspiracy to make your day just that bit more frustrating.

There are actually plenty of factors that may contribute to train cancellations. Some are quite obvious, others might surprise you.

Most British trains tend not to have snowploughs. It’s simply not necessary and would be too expensive to ensure every train has a plough attached. That, paired with the fact the UK doesn’t see a whole lot of snowfall in comparison to other countries, suggests that we won’t be seeing them on all trains anytime soon.

However, trains are unable to run without ploughs where snow is deeper than 30cm. Luckily, we don’t often see this much snowfall in the UK, however wind can cause snow drifts, which do build up.

Network Rail use a mix of methods to clear tracks, ranging from independent snow ploughs situated between two locomotives to allow ploughing in either direction through deep drifts, to fitting miniature snow ploughs to some locomotives clearing the rail surface. We also see fences which prevent snow from drifting onto the tracks fitted on many of the major routes.

Trains are also at a much higher risk in slow areas, for instance, when approaching stations or at points. Once the snow has compacted enough to form ice on the tracks, power points can easily be prevented from working.

Debris is also a major concern when it comes to snowy weather. Tree branches can snap off in the freezing temperatures, creating obstacles on the tracks. Large ice sheets can also damage trains and tracks, which, of course, can also cause rail points to stick together if they are not already packed with snow.

Beyond environmental issues, the trains themselves can be affected by the chilly conditions, with train door runners jamming because of the transfer of grit salt from the platform to the carriage. It’s not unknown for a build-up of snow to occur around the moving parts of the braking system, which then freezes and makes braking ineffective.

In fact, this was the cause of a derailment in January 2010 when a freight train from Inverness was unable to stop on the descent to Carrbridge on the Highland Main Line. It derailed, with the locomotive ending up in a thicket of trees. Luckily, the driver only suffered minor injuries.

What provisions are there?

It’s not all an uphill battle. Provisions are being developed, with some already in place to try and avoid issues resulting from winter weather and to keep people on the move.

Network Rail has a fleet of specialised snow treatment trains, which will be used to scrape off ice from rails using tough, metal brushes. They also spray anti-icing fluid, preventing further ice from forming.

Heaters and NASA-grade insulations may be fitted onto points that are more likely to freeze over. Train operators will also run empty ‘ghost’ trains during the night hours. This is in order to clear away some of the snow on the tracks.

Most relevant to commuters and travellers, winter timetables will be created in order to provide plenty of notice about expected cancellations, changes and replacements.

How do I prepare?

Should the weather take a turn for the worse and bring in heavy snow and ice, it’s vital to be prepared.

If you struggle to get your car off your driveway, then it’s likely trains will struggle to leave the station. After all, they can’t get around obstacles or snowdrifts very easily.

Despite all the provisions being implemented to help resolve cancellations, there’s no telling what could happen. So, check timetables ahead of time, consult the weather, look online to find updates, and have a plan of action should you find your train has been cancelled.

It’s worth remembering rail staff have to get to work too, and they could be snowed in.

Sometimes replacement buses will be available; however, if these are a no-go, perhaps it’s time to give your boss a quick phone call to let them know that you’re having a snow day.

Generally, rail companies give advice about not travelling, adding that tickets will be valid for a day or two afterwards. Check on various websites and social media to keep up-to-date with this information.