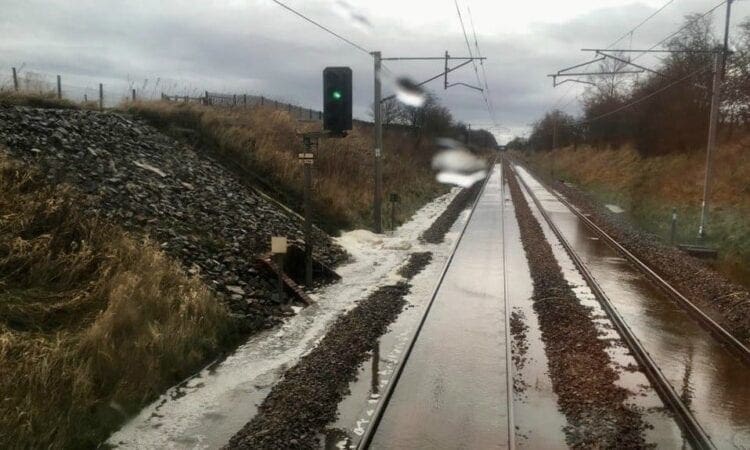 The UK and French governments must make a joint commitment to support Eurostar during the pandemic, according to the Transport Select Committee chairman.

That is a stark change from before the pandemic, when Eurostar were operating more than 50 daily services. Click here to read more.

The Rail, Maritime and Transport union (RMT) has warned of the severe consequences that adverse weather could have on rail services.

The union has raised concerns with Network Rail about insufficient resilience to poor conditions which could endanger passengers and rail workers.

The warning comes a week after the collapse of part of an Aberdeenshire rail bridge due to appalling weather, close to the site Stonehaven tragedy. Click here to read more.

Investigation as rail worker one second from being hit by train

A railway worker was nearly hit by a 60mph train as he retrieved a bag from the tracks.

The Rail Accident Investigation Branch (RAIB) has launched a probe into the incident at Rowlands Castle station, Hampshire, on December 19.

The Network Rail mobile operations manager was able to get on to a platform and clear of the train just before it passed through the station without stopping. Click here to read more.

An investigation is under way after a passenger train travelled at 45mph through a 5mph restriction zone near Beattock, put in place due to problems with an embankment.

The Avanti West Coast passenger service between Glasgow Central and London Euston entered the emergency speed restriction near Beattock, in Dumfries and Galloway, at 12.25pm on December 20, 2020.

According to the Rail Accident Investigation Branch (RAIB), the restriction was in place “because of the earlier failure of an embankment”. Click here to read more.

Ministers have been accused of failing to “get a grip” on the “ballooning costs” for HS2.

Speaking in the Commons, Labour’s shadow transport minister Tanmanjeet Singh Dhesi raised concerns that cities such as Leeds could miss out on the benefits of the high-speed rail link.

The project, which would connect London to Birmingham, Manchester and Leeds, has faced multiple delays and rising costs. Click here to read more.

Manchester services will ‘significantly improve’ from May 2022

Train reliability in and around Manchester will “significantly improve” from May 2022, according to the Department for Transport (DfT).

A consultation has been launched on three options to amend timetables in a bid to boost performance and punctuality.

Each choice has been designed to reduce the risk of knock-on delays when a train is held up, although some services will be axed. Click here to read more.

Dozens of rail staff have been recognised for their life-saving actions in rescuing vulnerable people.

They were praised for their compassion and bravery in putting their Samaritans training and listening skills to the test by helping vulnerable people to safety. Click here to read more.

CrossCountry – Train services are now able to run normally between Bristol Parkway and Newport.
Gatwick Express – Gatwick Express services remain suspended until further notice. Southern and Thameslink are still running to and from Gatwick Airport, and will provide journey options to both London and Brighton.
Grand Central – From Saturday 9 January until Sunday 28 February, Grand Central service will be suspended, as a result of the national restrictions that are in place. You can find more information here. A reduced service will continue to operate until the end of the day on Friday 8 January.

To help stop the potential spread of coronavirus, the UK, Scottish and Welsh governments have decided that the wearing of face coverings when travelling by train or other public transport is compulsory in all parts of Britain. So, if you travel by train, make sure you bring a face covering to wear.
We will continue to run as much of the network as possible and will update our website with any service changes. Please check before you travel.