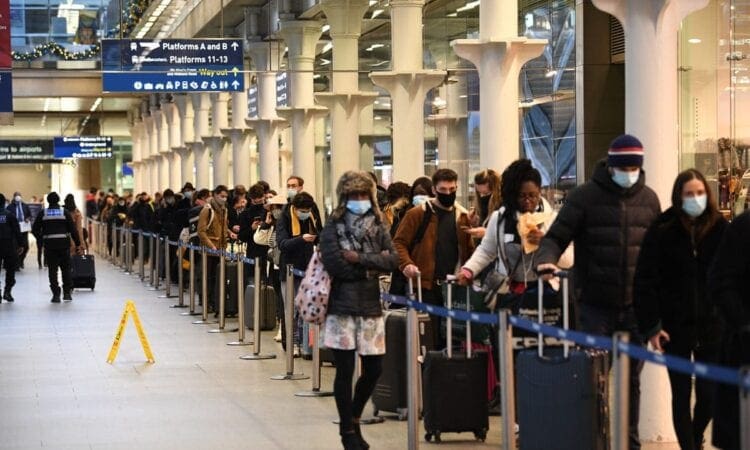 Passengers who crowded on to trains to escape the tightening of COVID-19 restrictions in London have been branded “totally irresponsible” by the Health Secretary Matt Hancock.

Mr Hancock condemned the busy scenes on Saturday night which came after the Prime Minister announced tougher coronavirus measures for the capital.

Extra police officers are to be deployed to enforce travel rules at London’s stations, with the public being urged to adhere to Government guidance.

The packed out trains came after Boris Johnson placed millions of people living in Tier 3 parts of London, the South-east and East of England in a new Tier 4.

The changes, which came into force at midnight on Saturday, mean households mixing over Christmas is banned, travel into or out of Tier 4 areas is only permitted for very limited reasons and overnight stays away from home are largely prohibited.

Appearing on the BBC’s The Andrew Marr Show on Sunday, Mr Hancock said: “I think those scenes were totally irresponsible.

“We have all got a responsibility.

“We in Government of course have a responsibility, but so does every single person.

“The plea that I have is that people will play their part, because it is only by acting, all of us, that we can get this under control.”

In a statement, Transport Secretary Grant Shapps said it was “incredibly important” that people followed guidance, stayed at home and did not try to travel.

He added: “If you are in Tier 4, the law means you must stay at home and you cannot stay overnight away from home.

“Across the rest of the country, you must stay local.

“Follow the guidance and please do not come to a station unless you are permitted to travel.

“Extra BTP (British Transport Police) officers are being deployed to ensure only those who need to take essential journeys can travel safely.”

Despite people now living under Tier 4 restrictions being told not to travel unless essential, Eurostar tickets sold out in less than hour this morning, amid suggestions France was likely to ban UK travellers.

At 11.50am there were seats available on the three Eurostar trains leaving London for Paris today, at 12.24pm, 13.31pm and 7.01pm. Less than an hour later all Eurostar tickets were sold out for Sunday.

Sir Peter said: “At stations we will be deploying extra staff, announcements will make the law clear, and additional BTP officers are in place to ensure that only essential journeys take place.

“People considering driving should also stay at home or stay local. The new restrictions mean that people should not travel into or out of Tier 4 areas, and across the country you should stay local.

“You should play your part in tackling the spread of this virus.”

Public Health England’s, Dr Susan Hopkins said she hoped travellers would reduce their contacts for the next few days to avoid spreading coronavirus.

She told the BBC’s The Andrew Marr Show: “I understand people’s wish to get home to their families and loved ones that they may live with on a normal day-to-day basis and wanted to get out of London last night.

“I hope that when they go to wherever they are moving to they reduce their social contacts and don’t contact anyone outside their household for the next 10 days, as that will help minimise the risk of transmission to other parts of the country.”

Mayor of London Sadiq Khan said the crowded scenes were “a direct consequence of the chaotic way the announcement was made”.

He told BBC Breakfast: “I understand why people want to return to see their mums, dads, elderly relations, but I think it’s wrong.”

He warned Londoners that they may not realise they have the virus and could risk spreading it to relatives.

Mr Khan added: “We now have a vaccine being rolled out, you can see light at the end of the tunnel.

“How are you going to feel if you pass the virus on to an elderly relation, somebody you love, whose life could well be long and fruitful because of the vaccine, who may catch the virus and, God forbid, lose their life?”

Union bosses said the Government imposing new restrictions had triggered rail service “chaos” that could have been avoided, emphasising that transport workers needed to be kept safe.

Mick Cash, general secretary of the Rail, Maritime and Transport (RMT) union, said: “The scenes of overcrowding and chaos on rail services last night were a disgrace and must not be repeated.

“They reflect the shambolic approach of the Government that has been a hallmark of their management of the Covid pandemic.”

Manuel Cortes, general secretary of the TSSA union, said: “The Tory government’s mixed messaging has been a problem from the start of this pandemic and has hampered attempts to control the virus.

“Their latest U-turn is possibly the cruellest of the lot as millions have seen their hopes of spending time with their loved ones dashed, very late in the day.”