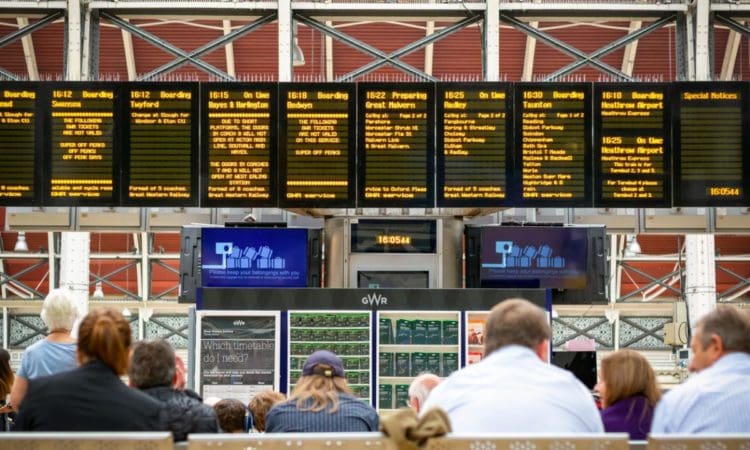 Train reliability across Britain reached the worst level on record in recent weeks, with Avanti West Coast cancelling the equivalent of about one in five services.

Analysis of Office of Rail and Road (ORR) data by the PA news agency found the cancellations score for all operators during the four weeks to January 7 was 8.0%.

That was double the proportion from the previous four weeks, and represents the poorest reliability in records dating back to April 2014.

Avanti West Coast’s latest cancellations score was 18.9%, which was one of the highest ever recorded for any operator.

The Department for Transport (DfT) responded to the figures by saying it is working with train companies to ensure there is “swift recruitment and training of new drivers” but Labour claimed services are “in crisis”.

The impact felt by passengers is even worse, as the statistics do not include services removed from timetables as late as 10pm on the previous night.

This controversial process known as p-coding – which last week the ORR ordered operators to stop using when they axe services due to not having enough staff or trains in the right locations – is what happens ahead of strike days.

But a rail industry source noted that the latest reliability figures cover a period when operators were badly affected by an overtime ban introduced as part of industrial action, and stated that there are difficulties resuming services on the day after strikes.

The operator – a joint venture between FirstGroup (70%) and Italian state operator Trenitalia (30%) – was given until April 1 by the DfT to improve its services when it was awarded a short-term contract extension in October 2022.

It slashed its timetable in August last year to cut short-notice cancellations after a sharp decline in the number of drivers voluntarily working on rest days for extra pay, amid industrial relations disputes across Britain’s railways.

There was a huge uplift in planned services when a new timetable was introduced on December 11, but this was followed by poor reliability.

Southeastern, whose services were taken over by the DfT in October 2021, had the second worst cancellations score for the four weeks to January 7 with 12.2%, which was its most on record.

It was followed by Govia Thameslink Railway, which consists of Southern, Thameslink, Great Northern and Gatwick Express, and TransPennine Express, which both had a score of 11.9%.

A DfT spokeswoman said: “We are working closely with train operators to ensure disruption is kept to a minimum and long-term solutions are put in place, including the swift recruitment and training of new drivers.”

“Ministers continue to hand over millions in taxpayer-funded performance bonuses to failing operators.

“The Conservative answer to the chaos on the railways is more of the same failed status quo.

“The next Labour Government will end this farce, put passengers back at the heart of our rail network and invest in infrastructure fit for the century ahead.”

An Avanti West Coast spokesman said: “We know that our customers have not been getting the service they deserve and we’re sorry for that.

“Our new timetable, introduced in December, greatly increased the number of services we’re running and customers are seeing the benefits of that, with more seats and more frequent services.

“Performance is steadily improving and we’re running far more services than we were in the autumn.”

A spokesman for the Rail Delivery Group, which represents operators, said the coronavirus pandemic has had a long-term impact on services by reducing staff training in 2020 and 2021 and increasing absence rates.

He went on: “Regrettably, these absences often lead to last-minute cancellations but train operators across the industry have been working tirelessly to recruit and train new staff to improve resilience.

“Obviously, the current national dispute involving three rail unions has also caused severe disruption to services both on strikes days and on the days either side of them.”