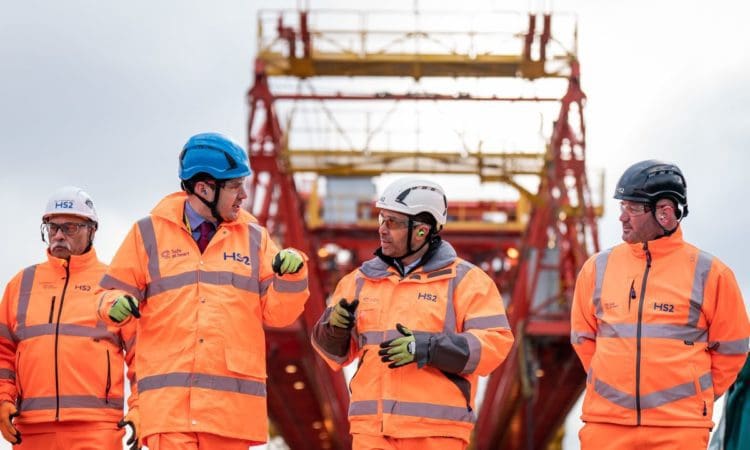 HS2 minister Huw Merriman hailed the “extraordinary feat of engineering and architecture” as he inspected construction of what will be the UK’s longest railway bridge.

Mr Merriman visited the site where HS2’s 2.1-mile-long (3.4km) Colne Valley Viaduct is being built to carry high-speed trains above a series of lakes and waterways just outside north-west London.

Construction began in May last year, and the first 480 metres of the structure have been built.

A 160-metre-long machine known as a launching girder is being used to lift into position 1,000 giant concrete segments that form the viaduct’s arches.

The segments each weigh up to 140 tonnes and are being made at a temporary factory nearby which was built specifically for the project.

Mr Merriman said: “This is an extraordinary feat of engineering and architecture, designed to enable spectacular views across a beautiful part of our British countryside which is being preserved and protected by this project.

“It was incredible to be the first person to officially walk on top of it today – another milestone for this monumental project which will transform journeys for people up and down the country, creating almost 30,000 jobs and providing a low-carbon alternative to cars for decades to come.”

“Once complete, this record-breaking structure will form a key part of the HS2 route – helping to deliver better connections across the UK, free up rail capacity on the existing train network, and offer passengers zero-carbon travel options.

“I’d like to thank all those involved in getting us to this exciting stage and look forward to seeing the whole viaduct come together over the coming years.”

The viaduct is expected to be completed by summer 2025.

The launching girder is the only machine of its kind in the UK.

Designers of the viaduct were tasked with minimising its impact on the environment.

It is being set low into the landscape, taking inspiration from the flight of a stone skipping across water.

The work is part of a £1.6 billion contract handed to joint venture Align, which also involves building a 10-mile-long (16km) tunnel under the Chiltern Hills.