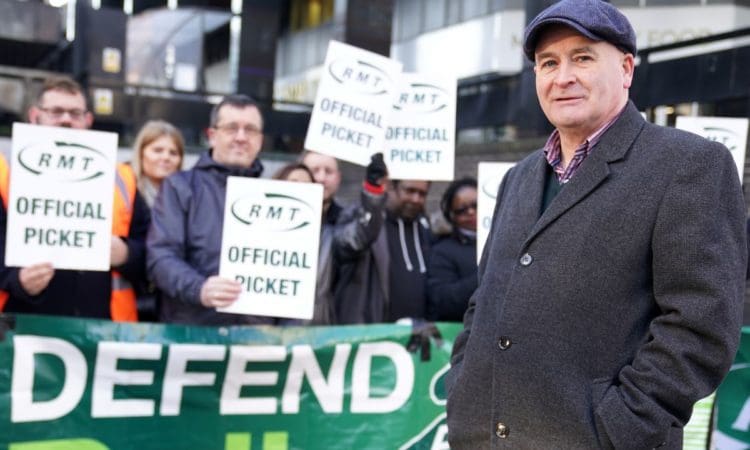 RMT general secretary Mick Lynch has described legislation that will aim to minimise disruption during industrial action as a “symbol” that the Government is “losing the argument”.

The Government announced on Thursday that they are pressing ahead with plans to introduce new legislation for “minimum safety levels” during industrial action.

The Bill will be introduced in Parliament in the coming weeks to ensure vital public services maintain a “basic function” when workers go on strike.

Minimum safety levels will be set for fire, ambulance and rail services and the Government said it will consult on the “adequate level of coverage”.

Speaking from the picket line at Euston station on Friday, Mr Lynch told BBC Breakfast that the Government is trying to “close down” the unions with the new legislation.

“What this is a symbol of is that the Government are losing the argument,” he said.

“They’ve lost the argument on austerity and pay, and the state of our national public services.

“And instead they want to close that argument down by closing down the unions and stopping us from campaigning against poverty.”

He said the Bill is a threat to sack union members if they refuse to go to work.

“What they are saying is that they will sack our members if they don’t go to work,” he said.

“They are going to conscript our members.

“We have to name who will go to work, and if those members in a lawful manner don’t want to cross our picket line they can be dismissed individually and the union can be fined.

“So we will have to see what the law says.”

It comes as services have been crippled by the walkout by members of the Rail, Maritime and Transport union (RMT) at Network Rail and 14 train operators on Friday.

The action will last for 48 hours and follows a stoppage on Thursday by train drivers in the Aslef union which caused widespread disruption.

Only around 20% of normal services are running on Friday and trains will finish earlier.

The strike ends a week of industrial action on the railways, with the dispute remaining deadlocked.

Speaking to broadcasters on a visit to a school in south-west London, Prime Minister Rishi Sunak said his Government had invited union leaders for what he hopes will be a “grown-up” conversation on Monday about what is affordable.

The Prime Minister was asked if proposed legislation could see nurses sacked for striking, and if it was his ambition to go further and make some more strikes in critical services illegal.

Mr Sunak said: “Yesterday the Government wrote to all union leaders inviting them in for talks on Monday.

“We incredibly value the important work that our public sector workers do, especially our nurses, and we want to have an honest, grown-up conversation about what’s affordable, what’s responsible for the country.

“Those invitations have gone out and I’m hopeful that those meetings can happen on Monday so we can have a productive conversation and find a way through this.”

Mr Sunak did not rule out people being sacked for not going to work during strikes under the proposed new legislation.

Asked whether people could be sacked under the legislation for not working, Mr Sunak told broadcasters: “I fully believe in the unions’ role in our society and the freedom for them to strike.

“I also believe that that should be balanced with the right of ordinary working people to go about their lives free from significant disruption.

“That’s why we’re going to bring forward new laws, in common with countries like France, Italy, Spain and others, that ensure that we have minimum levels of safety in critical areas like fire, like ambulance, so that even when strikes are going on you know that your health will be protected.

“I think that’s entirely reasonable and that’s what our new laws will do.”

He added that he is “hopeful” that talks with union leaders can be “constructive” and “we can find a way through this”.