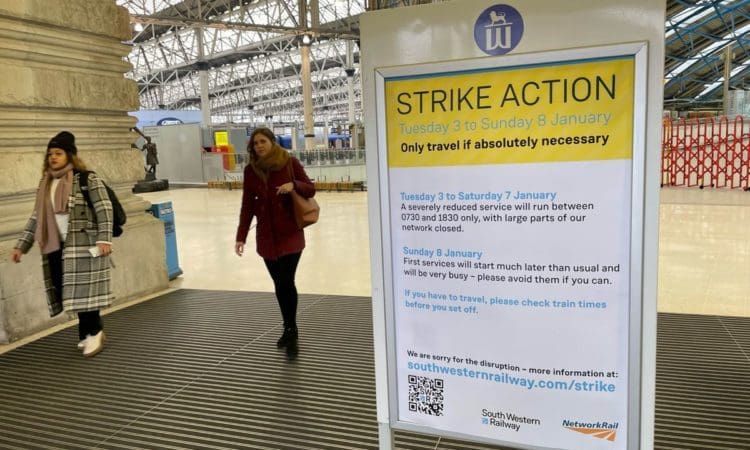 The Rail, Maritime and Transport union (RMT) should get “off the picket line and round the negotiating table” as passengers face fresh disruption from strikes, Transport Secretary Mark Harper has said.

Around half of Britain’s railway lines are closed and only a fifth of services are running as thousands of workers at Network Rail and train operators stage two 48-hour walkouts starting on Tuesday and Friday.

Drivers in the Aslef union will strike on Thursday.

Picket lines have been mounted outside railway stations across the country in a repeat of what became a familiar sight last year.

Mr Harper told Times Radio: “There is a very fair pay offer on the table which has been accepted by two of the trade unions on Network Rail.

“I think it is time that the RMT got off the picket line and round the negotiating table to try and hammer out a deal with the train operating companies and Network Rail.”

The minister insisted he has had “perfectly constructive discussions” with all rail union leaders when asked if he has a good relationship with RMT general secretary Mick Lynch.

He added: “This is a very difficult week for those that depend on the train to get to work, to carry out important appointments, and for businesses who depend on those commuters.”

Speaking to the PA news agency from an RMT picket line outside London Euston station, Mr Lynch said: “The Government and the companies have not put any fresh proposals to us.

“They know what needs to be done to move towards a settlement, how to work through the problems and get to some documentation that we can all support, but that’s not happened so far.

“We’re hoping in the next few days that they will come to us and propose more meetings and more sessions of negotiation but at the moment that’s simply not there.

“The Government has let these strikes go ahead and that’s unfortunate.”

Tim Shoveller, Network Rail’s chief negotiator, said the Government-owned company wants to “work with the RMT now to make clarifications where there’s been misunderstanding” with the rejected offer, and put it to another vote.

He told BBC Radio 4’s Today programme: “We only need 2,000 people who voted no last time to change their vote and the deal will pass.

“So, we think that’s within touching distance.”