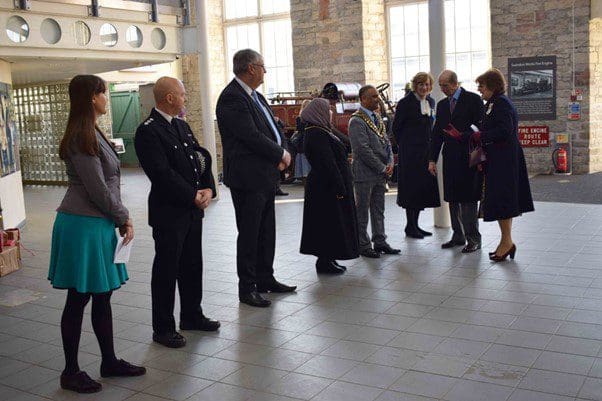 His Royal Highness The Duke of Kent visited the award-winning displays at STEAM – Museum of the Great Western Railway on Wednesday.

“It was fitting that after arriving at the museum, The Duke signed a Swindon Works clocking-in card, as was done by the then Prince of Wales at the opening of Swindon’s millennium project 22 years ago.”

The museum, which is owned by the Swindon Borough Council, showcases Swindon’s rich industrial history, with exhibition areas celebrating the men and women who built, travelled on and operated the Great Western Railway, under the direction of renowned Victorian engineer Isambard Kingdom Brunel.

The Duke of Kent viewed the museum’s iconic Swindon-built engines and even got up onto the footplate of GWR Locomotive No. 6000 King George V. STEAM Tour Guide and former GWR locomotive fireman, Geoff Davies, described the engine’s incredible voyage of over 3,500 miles as it travelled to America to take part in the centenary celebrations for the Baltimore and Ohio Railroad in 1927.

The Duke also viewed objects relating to the Royal Visit by Their Majesties King George V and Queen Mary to Swindon Works in 1924. The Duke was especially interested to hear how his grandfather, King George V drove GWR Locomotive No. 4082 Windsor Castle from Swindon Works to the Railway Station, with Queen Mary also on the footplate.

The Duke then had the opportunity to view STEAM’s new special exhibition programme for 2022, which explores the story of changes to train travel on the GWR network.

While in the museum, The Duke of Kent also spoke with STEAM volunteers and the Friends of Swindon Railway Museum about their work and contributions made to support STEAM.

Swindon Museums Manager, Frances Yeo, said: “It has been an honour to welcome His Royal Highness The Duke of Kent to STEAM. The close connection between the GWR and the Royal Family began in 1842 when Queen Victoria became the first reigning monarch to undertake a railway journey by travelling on the GWR train from London Paddington to Windsor.

“We have thoroughly enjoyed giving The Duke of Kent a tour of the museum and presenting the GWR’s fascinating history, including the immense impact that the railways had on Swindon.”

At the end of the tour The Duke of Kent met two groups of schoolchildren on a visit to the museum inside Queen Victoria’s Royal Saloon.

To find out more about STEAM, please visit: www.steam-museum.org.uk