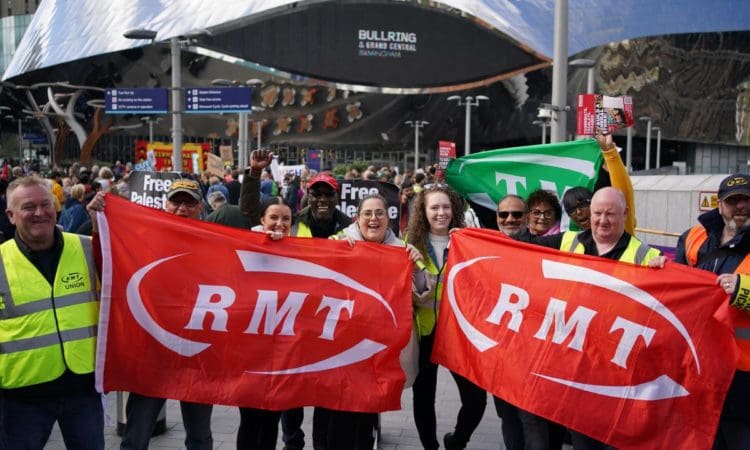 Members of the Rail, Maritime and Transport union (RMT) will walk out from 6pm on Christmas Eve until 6am on December 27 and will press ahead with two 48-hour strikes next week.

The union announced it will put the latest offer from Network Rail (NR) to its members, with a recommendation to reject.

The RMT said there had been no improved offer from the train operating companies, claiming they still awaited a mandate from the Government.

Strikes on 14 train companies will go ahead next week although talks will be held with the Rail Delivery Group on Tuesday.

RMT general secretary Mick Lynch said it was unfortunate that the union had been “compelled to take this action due to the continuing intransigence of the employers”.

He said: “We remain available for talks in order to resolve these issues but we will not bow to pressure from the employers and the Government to the detriment of our members.”

The Transport Salaried Staffs Association (TSSA) announced it was calling off strikes planned in NR for December and is putting an offer to its members.

The TSSA had been due to strike on December 17 and take other forms of industrial action from December 13.

The union had announced that an offer from the Rail Delivery Group had been rejected, meaning industrial action at train operators would go ahead in the coming weeks.

The TSSA said on Monday that after talks with NR over the weekend, it had received a “best and final offer” in writing from the company, which was considered at a meeting of its reps.

Union members will vote in the coming weeks on whether to accept the offer.

Luke Chester, TSSA organising director, said: “This offer is the best we can achieve through negotiation, and it was undoubtedly improved because of the ballot results and strike action taken by our members, who we applaud.

“Our members will now have their say on this offer and we are suspending strike action.

“Our union is pleased that this offer provides job security and certainty for Network Rail staff through to 2025 and we’re proud to have achieved a pay offer which provides for the lowest paid in the company with significant underpinning to ensure that those hardest hit by the cost-of-living crisis receive proportionately the most.

“This offer shows what can be achieved when employers and unions are able to negotiate in good faith. It is significantly better than the offer put by the Rail Delivery Group, which we have rejected.

“On every issue – job security, pay and conditions – the RDG offer falls short and is shackled by Government interference. They need to look at what can be achieved when negotiations are not hindered and come back to the table with an improved offer that allows us to resolve this dispute once and for all.”

The TSSA said NR had offered a minimum pay uplift of a consolidated £1,750 or a 5% increase (whichever is greater) to the annual base rates of pay effective from January 2022, and £250 to employees who earn £24,000 a year or less.

NR was also offering no compulsory redundancies for general grades and controllers until January 31 2025.

Staff and their families will also get a 75% discount on leisure travel and no unagreed changes to terms and conditions of employment will be made, the union said.

Tim Shoveller, Network Rail’s chief negotiator, said: “This response from the RMT to a significantly enhanced offer exposes their true priority – using the British public and Network Rail workers as pawns in a fight with the Government.

“What use is a referendum that means that strike disruption is inevitable? At best it’s the tactic the RMT played in October by calling the strikes off at the last minute and causing immense disruption to passengers and vital freight routes.

“They are playing fast and loose with people’s Christmas plans and the new strike dates announced deliberately target vital engineering work designed to improve the railway.

“A significantly improved offer is now on the table that gives Network Rail workers job security, a decent pay rise and some other substantial benefits for employees and their families.”

Transport Secretary Mark Harper said: “It’s incredibly disappointing that, despite a new and improved deal offering job security and a fair pay rise, the RMT is not only continuing with upcoming industrial action but has called more strikes over Christmas.

“It’s especially disappointing given the TSSA union has described this new and improved deal as the ‘best we can achieve through negotiation’ and called off strikes.

“The Government has played its part by facilitating a fair and decent offer but, by instructing its members to reject it, the RMT has failed to play its part and our rail network now faces more harmful disruption rather than helpful discussion.”