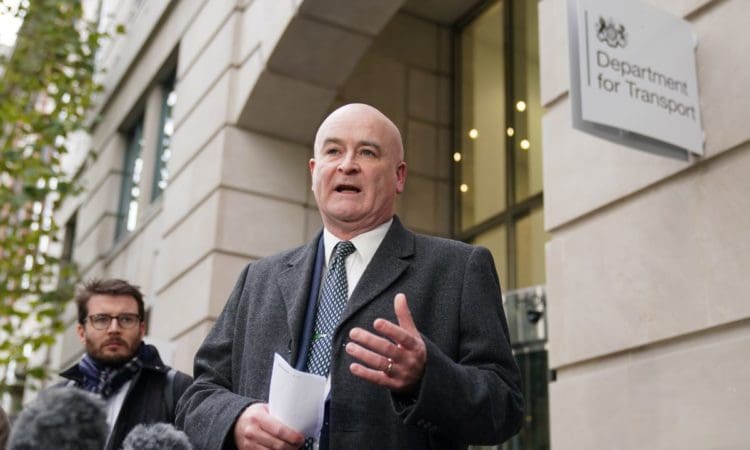 The biggest rail workers union has criticised the Government for a “lack of urgency” in dealing with the long-running dispute over pay, jobs and conditions.

The RMT said on Tuesday that the Government’s “lack of urgency” is “astonishing”, given that fresh strikes are due to start in two weeks.

The Transport Secretary has written to Mr Lynch making it clear his role is to “facilitate and support” a deal rather than get involved in negotiations.

In a letter to business groups and the hospitality industry, impacted by the strike, Mick Lynch wrote: “I have today received a letter from him (Mark Harper) offering a joint meeting with the Rail Minister, the employers and RMT this Friday.

“Whilst I have accepted the offer, this lack of urgency from the Government is astonishing. By this Friday more than a week will have passed since I met the Secretary of State without an offer being put on the table. Time is running out.

“We understand the impact that these rail strikes are having on your sector at this time of year, yet while you face disruption to your business at this critical time, the private rail businesses we are in dispute with will not lose a penny.

“Despite the rail companies being the employers of the staff taking strike action, the Government has decided to protect these private rail businesses from being liable for any loss of revenue arising from the strikes.

“This also ensures that the rail companies can continue to make profits, despite the strike action.

“The Government’s actions also mean that the train operating companies have no incentive to settle the dispute.

“On the basis of answers given in Parliament by the Government, we calculate that by the end of the next round of strikes the Government will have bailed out the train companies to the tune of £318 million to cover the cost of the strikes.

“To be clear, as a result of this indemnification, if these strikes go ahead, the rail companies will continue to make profits while you will lose money.

“As it is the Government which is clearly prolonging this dispute with their taxpayer-funded bailout for the private train companies, you would clearly be justified in asking what similar steps it will be taking to compensate your businesses.”

Mr Lynch said the RMT has come to a negotiated settlement with the Scottish and Welsh devolved Governments on pay and conditions on the railways but not Westminster.

He wrote: “In Scotland and Wales, RMT has settled similar disputes with the support of the Governments there but where companies are controlled by the DfT, time is running out.

“The strikes that are scheduled for the run-up to Christmas are a direct consequence of actions being taken by the Secretary of State, so I would urge you to take action to help resolve the dispute by writing to him calling on him to ensure a meaningful offer is made to facilitate a resolution of the dispute.”

Members of the RMT are due to stage a fresh wave of strikes next month at Network Rail and 14 train operators which will cripple services.

Mr Harper has also met with leaders of the Transport Salaried Staffs Association and is due to hold talks with officials from the train drivers union Aslef later this week.