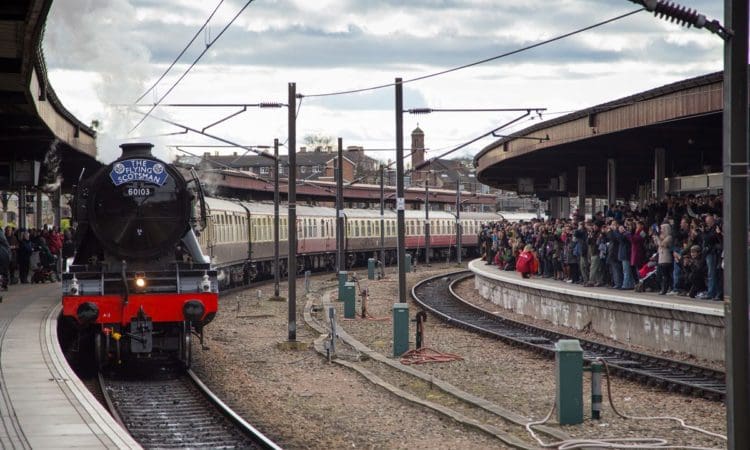 The world’s most famous steam locomotive, Flying Scotsman, is being prepared for its centenary celebrations next year.

Since May 2022, the celebrity engine has been undergoing a thorough mechanical overhaul to ensure it is ready to lead a national programme of events in 2023.

On September 1, the National Railway Museum revealed behind-the-scenes images of the locomotive as it is worked on by a team of specialist engineers from Riley & Son (E) Ltd.

It also announces, in collaboration with the Swanage Railway Trust, Flying Scotsman’s first centenary appearance this autumn, at the heritage railway at Swanage in Dorset.

Flying Scotsman, which first left Doncaster Works in February 1923, is synonymous with the golden age of rail travel and is a national treasure renowned as a feat of design and engineering. Designed by Sir Nigel Gresley, it was the first locomotive of the newly formed LNER (London and North Eastern Railway). It was given the name ‘Flying Scotsman’ in 1924, when it was selected to appear at the British Empire Exhibition in London, after the daily 10.00am London to Edinburgh rail service which started in 1862. Flying Scotsman holds the world record for a non-stop run by a steam locomotive, set in 1989 with a 442-mile trip.

Model railways manufacturer, Hornby, is also announced today as the lead sponsor for the year-long programme of centenary events and activities. Hornby has had a relationship with Flying Scotsman since 1927, when it introduced the first ‘0’ gauge tinplate model carrying the name ‘Flying Scotsman’. In 1969, it introduced its Flying Scotsman model and since then there have been almost 50 versions of ‘Flying Scotsman’ produced. It remains one of Hornby’s most popular model locomotives.

Further details of the centenary plans will be revealed later in the year, but will involve the publication of Flying Scotsman and the Best Birthday Ever (Thames & Hudson) – a new book by one of the UK’s best-loved authors and storytellers, Michael Morpurgo, and illustrated by the internationally renowned children’s book illustrator and author Michael Foreman – in October 2022, and the chance to see Flying Scotsman at several locations across the country, beginning with Swanage Railway in Dorset this October and at the National Railway Museum in York and Locomotion in Shildon in 2023.

Judith McNicol, Director of the National Railway Museum, said: “Flying Scotsman is one of the world’s most recognisable steam locomotives and still draws excited crowds wherever it goes. It is one of the jewels in the crown of our world-class collection, and we are delighted to share these iconic images from its recent overhaul as well as its first public event this autumn as we prepare for the engine’s centenary in 2023.

“Flying Scotsman and the Best Birthday Ever from Michael Morpurgo and Michael Foreman is a beautifully-written companion to the key moments of Flying Scotsman’s history and thanks to Hornby’s generous support, we will deliver an exciting programme of national events and activities throughout 2023.”

Michael Morpurgo, said: “I grew up on steam trains, remember the sound of them, the smell of them, the rhythm of them. I went on holidays on them, went to school on them. So when Michael Foreman asked me to write a story about the greatest, most iconic steam locomotive of them all, Flying Scotsman, I sat down at once and just did it… All the memories came flooding back. I loved writing my story, but now all I want to do is fulfil a lifelong dream, to get up on the footplate of Flying Scotsman and drive it, and be at last the engine driver I wanted to be. With me up there driving, we would be in Edinburgh faster than you could say, Flying Scotsman.”

Simon Kohler, Marketing & Development Director at Hornby Hobbies Ltd, added: “I have been fascinated with this icon of steam since the late 1960s when, one evening, I stood on Wellingborough Station and saw the true magnificence of the locomotive. Resplendent in its LNER apple green livery, I was simply captivated by the amazing spectacle, and that memory has stayed with me ever since.

“Hornby’s association with Flying Scotsman goes back almost 100 years, so it seemed only fitting that we should provide our support in celebrating the centenary of such a national icon. I would like to thank the National Railway Museum for giving Hornby the opportunity to do so.”