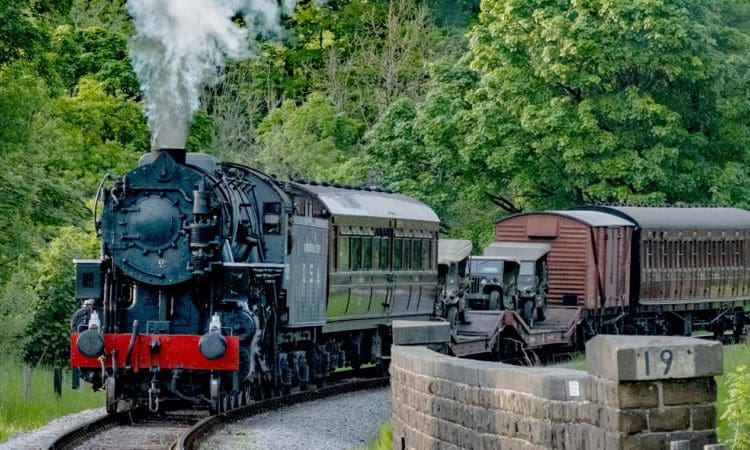 Over the August Bank Holiday Weekend, the Keighley & Worth Valley Railway will celebrate the Railway Children. Children dressed as wartime evacuees travel for free!

The original 1970s film ‘The Railway Children’ played a huge part in the success of the railway today, placing the 5-mile line in Yorkshire on the world stage for the next 50 years and winning the hearts of millions.

On Monday 29th August, the Children who play the characters Thomas, Pattie and Ted will visit the Oakworth Station. A book and merchandise signing with the children will take place between 12:00 and 14:00 in the Secret Hideout vehicle. Jemma Rodgers, the producer for the new film, will also be visiting on Sunday and Monday and will be doing a short talk on the film from concept to delivery.

Not forgetting the true stars of the films, 5820 ‘Big Jim’ will be hauling trains all weekend, and on Monday, a special demonstration of the American Military Train will pass through the Worth Valley from the new film. ‘The Scotch Flyer’ will be making a rare appearance and steaming through Oakworth Station on the uphill slog to Scotland on Saturday & Sunday, ‘We’re sure ‘Perks will be about’.

Historic vintage carriages in be in service over the weekend, with the 100-year-old Metropolitan Carriages featured in The Railway Children carrying passengers on Saturday & Sunday; bring your hankies to wave out the window. You can travel in ‘The Evacuee Carriage’ and follow in the footsteps of this year’s Railway Children all weekend. The carriages come from The Vintage Carriages Trust collection, based at Ingrow, with free entry for Day Rover Holders.

The ‘hero’ locomotive will be on display in the Exhibition Shed at Oxenhope; the ‘4F’ takes pride of place in the shed, alongside the Pannier Tank and in front of ‘The Old Gents Saloon’, which you’ll be able to climb onboard and explore, along with a volunteer to tell you about the carriage and its history.

Noel Hartley, the Railway’s Operations and Business Manager, said “We are thrilled that the Railway Children Return has been so well received and that our railway looks so beautiful on the big screen. This weekend is a fantastic opportunity to step into the film set that is the Keighley and Worth Valley Railway, see the locations and trains from the films, meet the cast, producer and volunteers that made it all happen and celebrate with us as we bring the Railway Children story to life.

“We’ll be really pleased to see children dressed in period costumes as evacuees and they’ll get a free day ticket if they go to the effort…! “

The Railway Children Weekend takes place from Saturday 27th till Monday 27th August, Tickets can be bought online via the website https://kwvr.co.uk/, book online 3 days in advance and save 15% on tickets or you can purchase standard tickets at any station