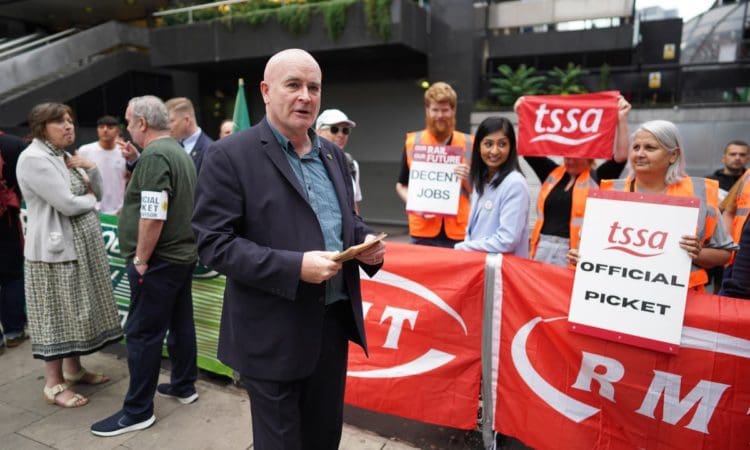 A union leader has warned the rail dispute could be prolonged “indefinitely” as the latest strike by thousands of workers caused travel chaos.

Mick Lynch, general secretary of the Rail, Maritime and Transport union (RMT), called on the Government to end its stance of refusing to get involved in talks over pay, jobs and conditions.

He joined a picket line outside Euston station in London as only around one in five trains were running across the country because of the walkout by members of the RMT and TSSA unions.

Lynch has written to Transport Secretary Grant Shapps, saying: “Your government has made the decision to use taxpayers’ money to bail out private train companies from being liable for revenue lost because of industrial action on the condition the same companies comply with government instructions to hold down pay, cut thousands of safety critical rail jobs, introduce driver only trains and close ticket offices across the network.”

Lynch said the union had calculated that, including the previous and forthcoming industrial action, more than £120 million of taxpayers’ money had been used to “bail out” private train companies to date.

He told the PA news agency: “Using taxpayers’ money to satisfy the anti-union agenda of the Tory party and seek to break the trade unions is shameful and means the dispute will be prolonged indefinitely as the train companies don’t lose a penny as a result of the industrial action and therefore have no incentive to settle the disputes.

“Instead of waging an ideological war against rail workers, millions of voters would rather that the Government allow for a fair negotiated settlement.”

A Department for Transport spokesperson said: “Yet again, for the sixth time since June, union leaders are opting to inflict misery and disrupt the day-to-day lives of millions instead of working with industry to agree a deal that will bring our railways into the 21st century.

“Today, thousands of A-level students across the country, many of whom have spent the majority of their college years studying at home due to the pandemic, are now being denied the chance to celebrate their hard work and dedication face to face with peers and teachers.

“It’s clear strikes are not the powerful tool they once were and union chiefs are no longer able to bring the country to a standstill as, unlike them, the world has changed and people simply work from home.

“All these strikes are doing is hurting those people the unions claim to represent, many of whom will again be out of pocket and forced to miss a day’s work.

“We urge union bosses to do the right thing by their members and let them have their say on Network Rail’s very fair deal, which will deliver the reforms our rail system urgently needs.

“It’s time to get off the picket lines and back around the negotiating table – the future of our railway depends on it.”

Lynch has also accused the Transport Secretary of trying to “flex his right-wing muscles” to get a job under Conservative leadership candidates Rishi Sunak or Liz Truss.

“Grant Shapps is getting more and more hysterical.

“What I think you’re seeing is a man who’s worried about his future. He’s got to try and flex his right-wing muscles in front of a parade of two really right-wing people who are going to be his boss.

“Last week he threatened to make everyone redundant on the railway by issuing letters called Section 188 letters.

“I think he’s lost the plot slightly and he needs to get back on track and enable a settlement to this dispute.”