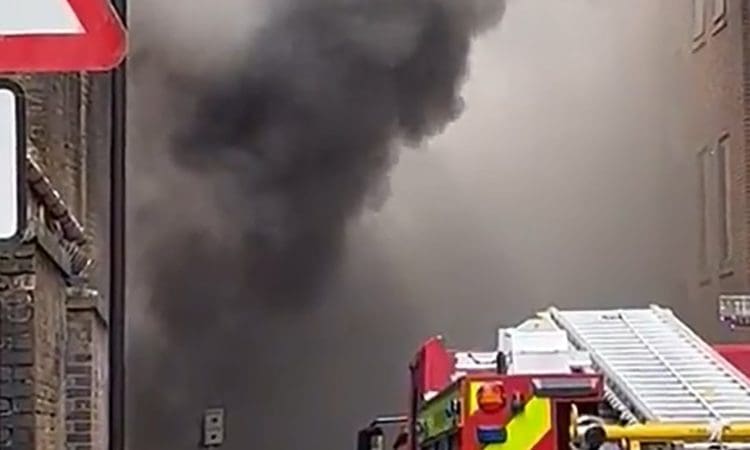 Rail services have been disrupted and buildings evacuated due to a large fire causing “bursts of black smoke” under railway arches in central London.

Ten fire engines and around 70 firefighters were called to the blaze on Union Street in Southwark on Wednesday morning, where the railway arch was completely alight according to London Fire Brigade.

Local student Lauren Chopin lives in an apartment two minutes’ walk from the fire and said she had to wear a mask in her apartment due to the fumes.

“There is a lot of smoke all through Union Street and neighbouring streets, there are many fire emergency services trying to put out the fire,” the 20-year-old told the PA news agency.

“It sometimes slows down and the smoke becomes whiter, only to be followed by another huge burst of black smoke… we have closed all doors and windows to limit the amount of smoke coming in.”

London Fire Brigade station commander Wayne Johnson said from the scene: “The blaze is producing heavy smoke and those living or working in the local area are advised to keep their windows and doors closed.

“Trains to and from London Bridge are affected and several buildings have been evacuated.”

The fire service said it had taken more than 33 emergency calls regarding the blaze, which it was first alerted to at 9.29am.

Train operator Southeastern wrote on Twitter: “Due to a fire next to the track between Waterloo East and London Bridge, services across all routes through London Bridge are severely disrupted.

“Trains are being diverted to other London terminals or terminated at alternative locations.”

Network Rail wrote on Twitter: “A fire broke out in an arch under (the) railway. London Fire Brigade are on site with multiple pumps and we have closed the railway until we can confirm it’s safe.”

It added: “We’re working with London Fire Brigade and we will need to inspect the railway once the fire out before we can reopen. Thank you for bearing with us.”