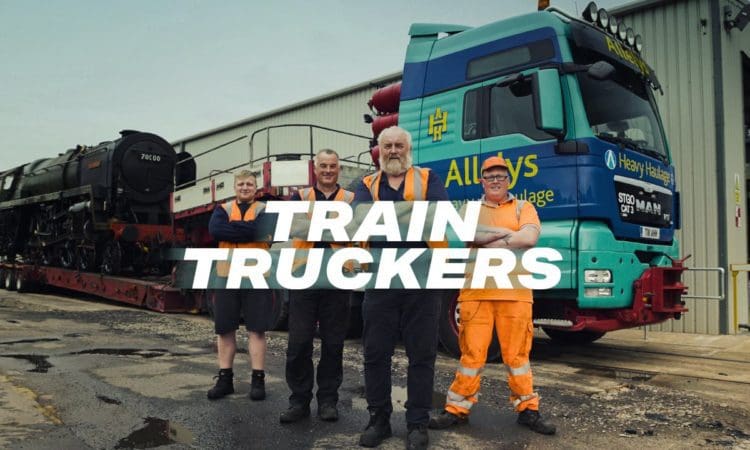 The Railway Magazine’s editor Paul Bickerdyke has added his expert knowledge of locomotives to the gritty new series of Train Truckers.

Made by Windfall Films, Train Truckers follows a family-run trucking firm called Allelys and its elite crew of heavy-haulage specialists as they haul the heaviest, longest and most precious locomotives around the UK and Europe by road, rail and sea.

After appearing in the first series, Paul was called back to be in episode one of the second series called 100 Ton Train, where the Train Truckers crew transported a fully restored Class 47 diesel engine, built in 1965 – nicknamed ‘Basil’ because the class was originally built by Brush Traction – from its home at Crewe Heritage Centre in Cheshire to the Ecclesbourne Valley Railway in Derbyshire.

Paul did what he does best and showed his extensive knowledge by talking about the locomotives and the heritage lines they were being moved to, giving viewers an impression of the size, power, history and status of each featured loco.

Paul said: “It was great to be involved in Series 2 of Train Truckers. Allelys does an amazing job moving these railway beasts across the country, often having to thread their way down narrow roads, but always get the job done despite the difficulty and the many things that could go wrong.”

Often up against the clock, and encountering unexpected hazards and hiccups en route, the Train Truckers team battle on to their destination in the 45-minute show.

Keep your eyes peeled for more appearances from The Railway Magazine team on Train Truckers!

If you missed the 100 Ton Train episode on the Yesterday channel, you can watch it free on demand at UKTV Play – https://uktvplay.co.uk