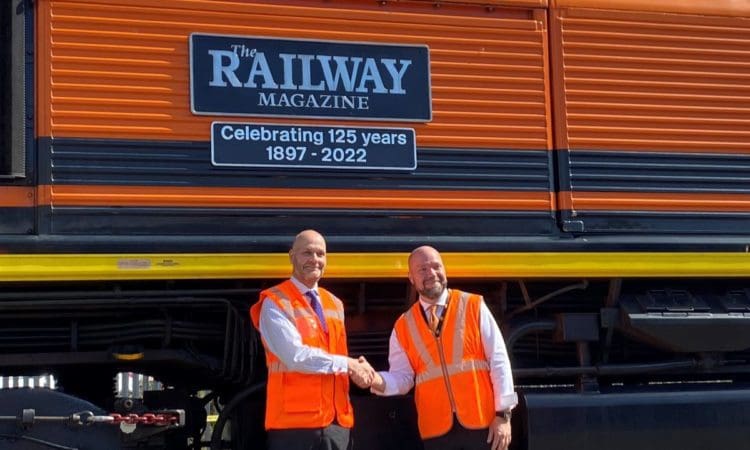 A locomotive which for 18 years has proudly carried ‘our’ name – The Railway Magazine – has been rededicated with additional nameplates to mark the magazine’s 125th anniversary thanks to operator Freightliner.

The new look was unveiled in a ceremony at Freightliner’s Midland Road depot in Leeds on August 9.

Watch more from the day, including the moment the nameplate was unveiled here:

Launched in 1897 when Queen Victoria was still on the throne and Robert Gascoyne-Cecil was Prime Minister, the magazine has been the recognised journal of record for all railway matters since then, against the background of five further monarchs, 23 different prime ministers, two World Wars, and tremendous social and economic change.

Celebrating the loco’s rededication, magazine editor Paul Bickerdyke said: “We are extremely proud that locomotive No. 66503 not only carries our name but now also celebrates our magnificent 125th year – our ‘quasquicentennial! – and I must thank Freightliner and its employees for granting this honour.

“The Class 66 fleet is the backbone of the modern rail freight industry, handling any job given to them large or small, which means rail fans will be able to see ‘our’ celebrity locomotive hard at work across England, Wales and Scotland.”

The Railway Magazine’s special 125th anniversary issue came out in July and was packed with fascinating features looking back over the decades.

The Railway Magazine is available for £4.90 on www.classicmagazines.co.uk. Order the 125th anniversary issue today.