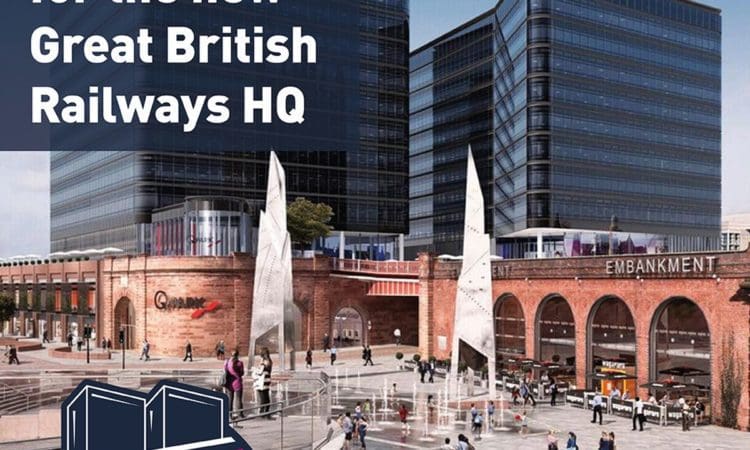 Salford City Council has announced that it is bidding for Salford to be the home of Great British Railways (GBR).

The council submitted their bid via the Greater Manchester Combined Authority (GMCA) to the government which proposes that the new home of GBR would be Embankment – a modern and sustainable office building complex in the city centre.

Paul Dennett, Salford City Mayor, said: “Salford would be the perfect destination for the headquarters of Great British Railways.

“Not only are we vastly connected to this country’s railway history through figures such as George Bradshaw and the father of railways, George Stephenson, but we are a city that has always been at the forefront of travel. From the first horse-drawn carriages to the first steamboats, our history as Salfordians is rooted in advancing the way we get around.

“We are now a thriving digital city, one of the fastest growing in the region and developing a significant skills and media cluster to rival anywhere in Europe. Greater Manchester has also become one of Whitehall’s key outposts outside of London and is home to several key government departments who have brought decision-making to our doorstep.

“However, whilst we continue to build a brighter future for our city, we remain home to communities in serious deprivation. The jobs, work opportunities and investment from GBR’s new HQ could be critical in helping us address the key disparities that we have in Salford.

“It would be the perfect example of the levelling up that this government is aiming to deliver for communities in the North West.”

In their bid, Salford City Council outlined their reasons why the city should be home to GBR.

Salford City Council is working with organisations and partners across the city and the GMCA on the bid which was submitted to the Great British Railways Transition Team in March 2022 with the support of MIDAS – Manchester’s inward investment agency.

The shortlist for the headquarters will be announced in May 2022 and then a public vote will open with the winner expected to be announced later this summer.