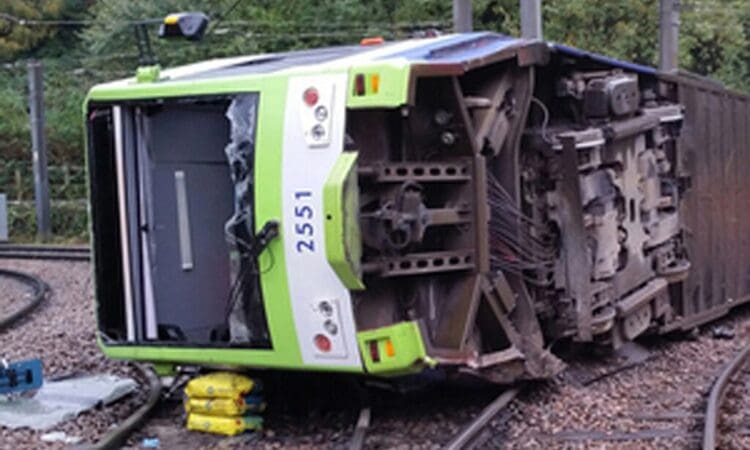 Prosecutions have been launched over alleged health and safety failings relating to the Croydon tram crash.

Seven passengers died and 51 were injured when a tram derailed in Croydon, south London on November 9 2016.

The ORR’s chief inspector of railways Ian Prosser said: “Following a detailed and thorough investigation, we’ve taken the decision to prosecute Transport for London, Tram Operations Limited and driver Alfred Dorris for what we believe to be health and safety failings.

“We’ve made a fair, independent and objective assessment about what happened, and it is now for the court to consider if any health and safety law has been breached.”

An inquest held last year heard the tram toppled over and spun off the tracks in darkness and heavy rain near the Sandilands stop after hitting a curve at 73kph (45mph).

The speed limit for that stretch of track was 20kph (12mph).

Services on Croydon Tramlink are managed by TfL and operated by TOL.

Both are alleged to have “failed to ensure the health and safety of passengers on the Croydon Tramlink network, so far as reasonably practicable”, the ORR said.

Mr Dorris is accused of an alleged failure to “take reasonable care of passengers”.

Danielle Wynne, 31, whose grandfather Philip Logan, 52, died in the crash, told the PA news agency that the prosecutions have come as “a little sense of relief” amid a “road of pure hell” for families over the past five years.

She said: “It’s not the criminal charges I was hoping for, but that was never going to happen with the law placement and how it is.

“But I have to take something from this – it’s been five-and-a-half years, it’s been a road of pure hell to have an inquest where we got no more answers than what we already knew, in fact it caused more questions for me than answers.

“I have a little sense of relief. I think that they should all be held accountable.”

She added: “I will be in that courtroom, I will be there however long it takes every step of the way, it’s for them, it’s justice for our loved ones and I don’t want their lives to have been lost for nothing, because that’s what it feels like at the moment.”

Ms Wynne, of Rochester, Kent, said that she is campaigning to change the law which means that the charge of death by dangerous driving, or death by careless driving, currently does not apply if tram accidents happen when the tram is not on the road.

Ben Posford, partner at London law firm Osbornes Law, who was lead solicitor for five of the seven families at the inquest, said: “This comes as welcome news for the families of the victims of the Croydon tram crash who have been fighting for years for justice.

“Their hopes of a criminal prosecution and an unlawful killing conclusion at the inquest were dashed, so I hope they can get some solace from this latest bid to prosecute Tfl, ToL and Mr Dorris.”

The families were left frustrated after the jury at the inquest concluded their loved ones died as a result of an accident and were not unlawfully killed.

Simon French, chief inspector of the Rail Accident Investigation Branch, told the inquest Mr Dorris may have slipped into a period of “microsleep” ahead of the curve.

During police interviews, Mr Dorris said he was “confused” but, when asked if he had fallen asleep, he replied: “No, no, no.”

The families of those killed say he has never apologised.

He was arrested at the scene, but in October 2019 the Crown Prosecution Service (CPS) announced he would not be charged with manslaughter due to a lack of evidence.

The CPS also said corporate manslaughter charges would not be brought against TfL or TOL.

Mr French told the inquest extra signage could have mitigated the derailment risk, and there were apparent “culture issues” at TOL that meant drivers were unwilling to admit to speeding or other errors.

There was a previous incident 10 days before the crash when a driver hit the same bend at 45kmh (27mph) and very nearly overturned, but it was insufficiently investigated, Mr French added.

A hearing for the health and safety prosecutions will be held at Croydon Magistrates’ Court.

A date will be set shortly.