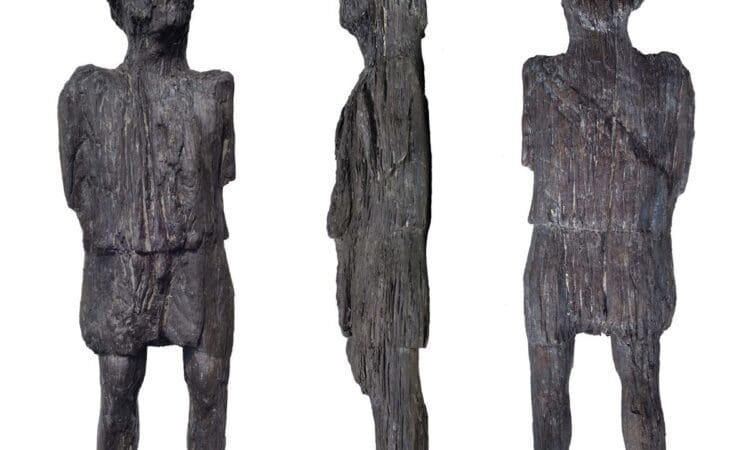 An early Roman rare wooden carved figure has been discovered during work on the HS2 project.

In July 2021 archaeologists from Infra Archaeology removed the well-preserved figure from a water-logged Roman ditch in a field in Twyford, Buckinghamshire.

As they were investigating at Three Bridge Mill, the team came across what they initially thought was a degraded piece of wood. As they continued to excavate it a humanlike, or anthropomorphic, figure was revealed. The figure, cut from a single piece of wood, stands at 67cm tall and is 18cm wide.

Initial assessment dates the wooden figure to the early Roman period, given the style of the carving and the tunic-like clothing. Shards of pottery dating from 43-70 AD were also discovered in the same ditch. Whilst archaeologists cannot be certain about what the carved figure was used for, there have been examples of wooden carved images being offered as gifts to the gods. It is possible that rather than being casually discarded in the ditch it was more deliberately placed there.

Given its predicted age and being carved from wood, what is most surprising is the incredible preservation of the artefact. The lack of oxygen in the water-logged clay fill of the ditch has helped prevent the wood from rotting, thus preserving it for centuries.

Iain Williamson, Archaeologist for Fusion JV said: “The amazing discovery of this wooden figure was totally unexpected, and the team did a great job of recovering it intact. The preservation of details carved into the wood such as the hair and tunic really start to bring the individual depicted to life.

“Not only is the survival of a wooden figure like this extremely rare for the Roman period in Britain, but it also raises new questions about this site, who does the wooden figure represent, what was it used for and why was it significant to the people living in this part of Buckinghamshire during the 1st century AD?”

Whilst the figure is in good condition given its age, the arms below the elbows and feet have degraded. A surprising amount of detail remains visible in the carving with the figure’s hat or hairstyle clearly noticeable.

The head is slightly rotated to the left, the tunic at the front seems to be gathered at the waist going down to above knee level, and the legs and shape of the calf muscles are well defined.

The figure is currently being preserved by York Archaeology’s conservation team at their specialist laboratory where it will undergo examination and conservation. A small fragment from the figure, found broken off in the ditch, is being sent for radiocarbon dating to provide an accurate date for the wood, and stable isotope analysis is being undertaken, which may indicate where  the wood originally came from.