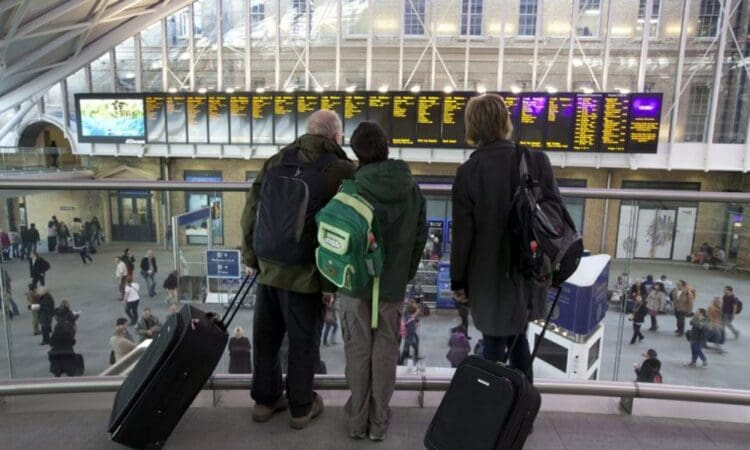 The Transport Secretary did not rule out increasing rail fares by 3.8% when challenged by Labour in the Commons.

Shadow transport secretary Louise Haigh said such a “hike” would be “brutal”.

The Labour MP said: “Ahead of a tough Christmas, people across this country are paying the price of Tory inflation.”

She said that, since the Conservatives entered Government, the price of commuting from Dewsbury into Leeds has risen more than three times faster than pay.

She asked if that was reasonable, and said: “Will he rule out the brutal 3.8% hike in rail fares rumoured for millions of passengers next year?”

He said: “She’s right about inflation of course, but it is a global post-pandemic issue, rather than specific to this country, and that’s why the Chancellor of the Exchequer announced a series of measures, including a big uplift in the living wage of 6.6%, outclassing even inflation.”

Ms Haigh replied: “Rail passengers across the country will have heard that reply and know that he is not going to rule the massive hike (out) next year.”

Also in the Commons, Labour MP Emma Lewell-Buck said the Government is “refusing point-blank” to meet northern leaders about their preferred rail upgrades.

The South Shields MP said: “The Secretary of State has claimed that this Government’s rail promises to the North are going to be fulfilled. Will he now commit to meeting with TFN to implement the plans contained in the northern transport charter?”

Transport minister Andrew Stephenson said: “She is wrong. I meet with Transport for the North regularly. I am happy to meet with them again.

“The Secretary of State meets with northern leaders regularly. He established the Northern Transport Acceleration Council and I am sure he will continue to meet with all northern stakeholders, but the most important thing is we are getting on with delivering for the North with over £17 billion being invested in Northern Powerhouse Rail.”

In his reply, Mr Stephenson said Transport for the North needs to move away from “big fancy plans” to delivering benefits for passengers.

“Since 2010, we have invested £29 billion in northern transport but there comes a moment when you have to move away from big fancy plans and actually start delivering,” he said. “This plan is going to deliver benefits for the North.

“Seventeen billion pounds being invested in Northern Powerhouse Rail with early benefits happening soon, over £2 billion already committed the Trans-Pennine route upgrade. We are getting on with delivering benefits to passengers across the North.”

Elsewhere in the session of questions to transport ministers, Labour MP Sam Tarry (Ilford South) said the Government “seems to be engaging in a blatant act of political sabotage for London’s vital transport networks”.

He said passenger numbers are dropping as the public listen to Government advice, saying: “All the while ministers continue to force a cliff-edge negotiation on TfL finances in what only can be seen as a political attack that will punish hard-working Londoners simply for doing the right thing.”

Mr Shapps said it is “completely untrue” that the Government is “playing politics” with Transport for London’s funding.

He said: “The letter that I received with the measures that the Mayor of London has to meet – these were actually outlined in the agreement – arrived on my desk three weeks late.

“Not unreasonably, on behalf of the taxpayers, I, therefore, went back to him and asked him to clarify some of those points. He accuses us of playing politics with this issue. Completely untrue.”