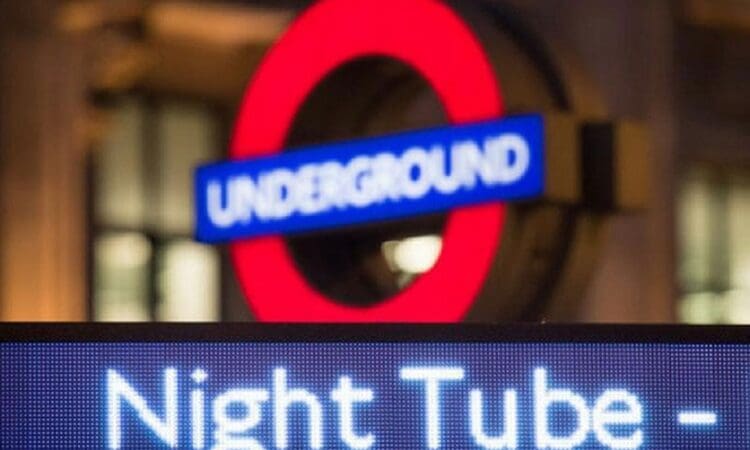 Plans to restart London Underground’s Night Tube have been hit by an announcement of strikes by drivers in a dispute over staffing.

Drivers on London Underground’s Night Tube are to stage a series of strikes from later this month in a dispute over staffing, a leading rail union has announced.

RMT has called action by members over what it describes as the imposition of unacceptable and intolerable demands on staff in advance of the Night Tube reopening which the union says will wreck work life balance by bulldozing through additional night and weekend working.

This union said it made every effort to reach an agreement with LUL that allows for the staffing of night-tube services without imposing unacceptable additional night and weekend working onto our members.

In a statement, RMT said: “LUL management has failed to engage positively with us and we are left with no alternative than to resume industrial action in furtherance of our demands.

“Accordingly, we instruct all train operator and instructor operators working on night-tube lines (Central, Jubilee, Northern, Piccadilly & Victoria) not to book on for any duty commencing between 04:30 on November 26 and 04:29 on November 27.”

The union says all train operator and instructor operators working on the Central and Victoria lines are instructed not to book on for any duty commencing:

All train operator and instructor operators working on night-tube lines (Central, Jubilee, Northern, Piccadilly & Victoria) have been instructed not to book on for any duty commencing from 04:30 on December 18 to 04:29 on December 19.

Mick Lynch, General Secretary, said: “No one has worked harder to ensure a safe environment for women on London Underground than the RMT. While Tube bosses have axed staff and left stations routinely unstaffed, with all of the obvious risks, we have campaigned relentlessly for the front line, physical ‎presence of visible staff on stations and platforms. We are now being repaid by the imposition of working arrangements that would wreck the work-life balance of our members.

“All of this was avoidable if the Tube management hadn’t axed dedicated Night Tube staff and perfectly workable arrangements in order to cut staffing numbers and costs. It’s that action which has led us to make today’s announcement.

“RMT supports the reintroduction of the Night Tube but we know full well that prior to its suspension during the pandemic it was a magnet for violent, abusive and anti-social behaviour. The Mayor and his officials cannot ignore that fact and the hard reality that it’s RMT members who made it a success in the first place. They now feel totally betrayed.

“We warned months ago that slashing two hundred Night Tube Train Driver positions would create a staffing nightmare and LU need to start facing up to that reality. The union remains available for talks. “