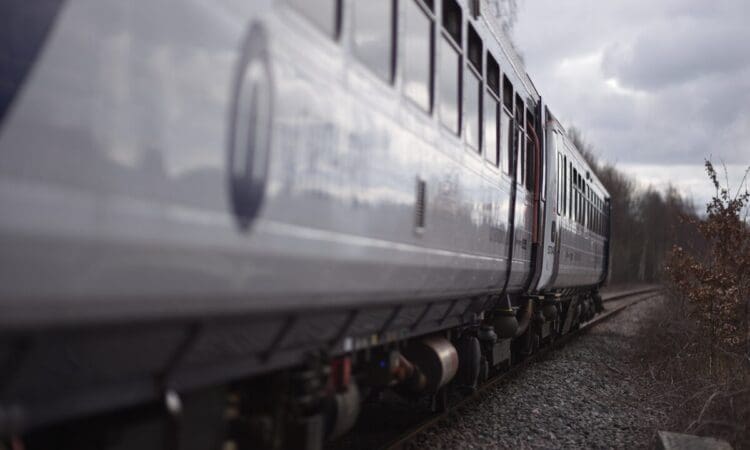 Dry ice will be blasted onto railway lines across northern England in a trial aimed at removing leaves more efficiently than current methods.

University of Sheffield engineers have developed a leaf-clearing technique which will be trialled by operator Northern on a passenger train in the coming weeks.

It involves pellets of dry ice being fired in a stream of air from a passenger train onto rails, making leaves frozen and brittle. The dry ice then quickly turns back into gas, causing it to expand and destroy the leaves.

Currently, leaves are cleared by 61 special trains which deploy high-pressure water jets followed by a gel containing sand and steel grains to assist with braking.

Engineers behind the dry ice system claim their method is significantly more efficient as it can be used by passenger trains which cover greater distances than the limited fleet of cleaning trains.

It also does not leave a residue which can damage rails and train wheels and can be used on the same stretch of railway more than once a day.

The system has previously been trialled on test tracks and could be rolled out widely by 2023/24.

Professor Roger Lewis, who is leading the development of the new method, told the PA news agency: “This technology will make a step change in train performance during autumn, improving safety.

“It will provide more predictable braking and traction than current technology, and will help to improve train performance, reduce delays, increase passenger satisfaction and support the use of new technologies to enable greater network utilisation of the UK’s railways.

“It will be great for passengers, but also for all the train operators and Network Rail as well. It will make their lives much easier.”

“One of the biggest risks to our performance during October and November is leaves on the line, but by helping to develop new technology we aim to deliver the very best service for our passengers.”

Some 10 million trees line Britain’s railway, and thousands of tonnes of leaves fall onto the tracks every autumn.

When trains pass over the leaves it creates a slippery layer, with a similar effect to black ice on roads. This leads to delays as trains must run at a reduced speed, accelerate slower and brake earlier.