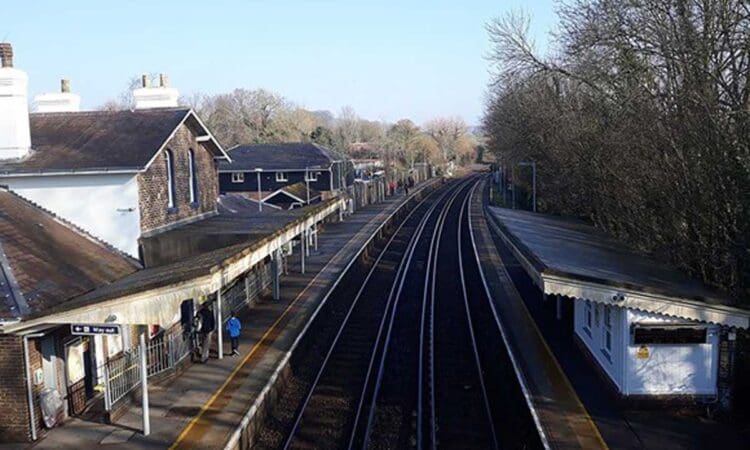 The Rail Accident Investigation Branch (RAIB) has released its report into a near miss with a member of staff at Rowlands Castle station in December last year.

At 19:14 hrs on December 19, 2020, a Network Rail Mobile Operations Manager (MOM) came close to being struck by a passenger train at Rowlands Castle station.

The MOM was on the track retrieving a rubbish bag when the train approached at 60mph. The MOM climbed back onto the platform and was clear of the line just one second before the train passed.

The incident occurred because the MOM had not arranged protection from train movements before going onto the track, the MOM and the signaller did not have a mutual or accurate understanding about the reality of the situation, and because the MOM was otherwise unaware that the train was approaching.

Underlying these causes are factors associated with the MOM’s competence, which was not adequately managed to ensure he worked safely on the track, and local management not functioning properly, which probably affected the recruitment, training and ongoing monitoring of the MOM.

Although not causal to the incident, RAIB observed that voice communications were not recorded due to a fault with equipment at the signal box. RAIB also observed that the automatic station announcements were not providing adequate warning to passengers of non-stopping trains at Rowlands Castle.

Three of the RAIB’s recommendations are addressed to Network Rail and concern the competency framework for MOMs as well as management arrangements for operational response staff, at both local and national level.

The RAIB also recommended South Western Railway ensure safety-related announcements at stations are made in a timely manner. The learning points highlight the importance of processes associated with safe systems of work and safety-critical communications, as well as addressing the observation on voice communications recording.