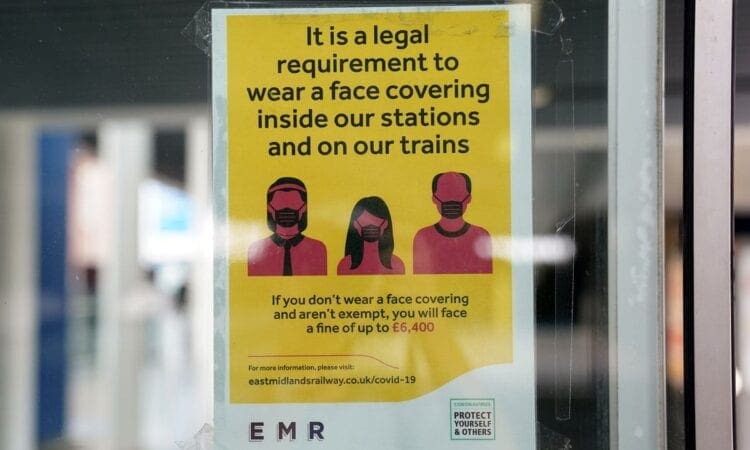 Transport Secretary Grant Shapps has supported a decision to make masks compulsory on the London Underground, despite his own Government scrapping the mandatory wearing of face coverings.

Shapps said the move is in line with what ministers want to happen, despite Prime Minister Boris Johnson’s decision to lift legal restrictions in England from July 19.

London Mayor Sadiq Khan said he was forced to act to make masks a condition of carriage across the capital’s transport network because of the Government’s decision to lift restrictions.

Mr Khan said he was not prepared to put Tube, tram and bus users in the capital at risk by removing the rules on face coverings after so-called “freedom day”.

Under the terms of use, enforcement officers would be able to deny access or eject passengers found to be non-compliant while using the Transport for London network.

Mr Shapps backed the move and ministers have urged a cautious approach once restrictions are lifted in England on Monday.

The Transport Secretary told Sky News: “Whilst we are going from this being a legal requirement to guidelines, we do expect individual carriers to make sure they are putting in place whatever is appropriate for their network.”

Mr Shapps added: “The airlines have already said that you will need to carry on wearing masks on those. It is very much in line with what we expected – indeed wanted – to happen.”

Mr Khan told ITV’s Good Morning Britain the London-wide rule was an “imperfect solution” but was necessary because “we don’t have national backing”.

“The Government for their own reasons have decided not to do that,” he told the BBC.

The requirement will mean passengers on all TfL services, which includes the Tube, bus, tram, Docklands Light Railway (DLR), Overground and TfL Rail, need to continue to wear a face covering in stations and for the duration of their journey unless they are exempt.

Mr Khan has also asked TfL to put measures in place to help ensure the continued use of masks in taxis and private hire vehicles by both drivers and passengers unless they are exempt.

Mayor of West Yorkshire Tracy Brabin has mandated that people must continue wearing face masks at bus stations in the region and called on the Government to make face coverings mandatory across all public transport networks.

Meanwhile the letter to Mr Johnson from leading healthcare workers states: “With continued pressures on staff and rising case rates, the use of face masks, social distancing and regular handwashing by the public must stay in place.

“The use of respiratory protection for staff in health and care settings must continue, alongside improvements in ventilation wherever possible.

“While you state that you would expect the public to continue wearing face coverings in healthcare settings, we ask that this is translated into action.

“As the rules change, this must be backed by clear Government communications for the public, so that health and care staff are not caught in the middle and placed at increased risk of abuse.”