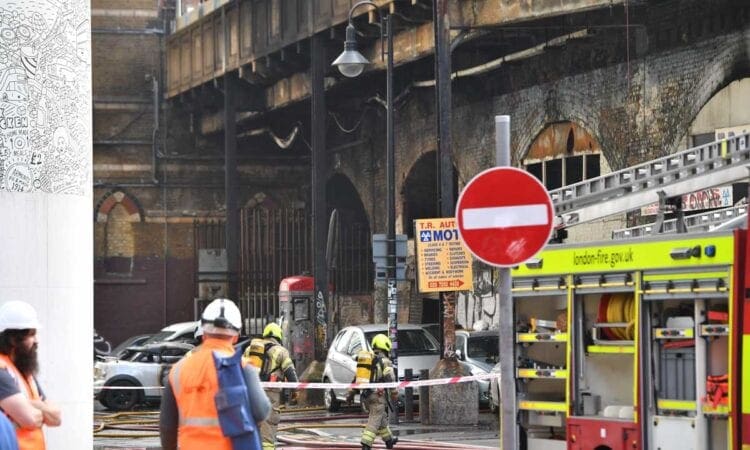 Some commuters face forking out more than £50 a day more for train travel if they use new flexible tickets, according to analysis by the Labour Party.

The tickets, which went on sale last week, allow travel in England on any eight days in a 28-day period.

The Government claimed the tickets match “modern working habits” and can save passengers who commute two or three times a week “hundreds of pounds”.

Around 100 firefighters battled a huge blaze close to Elephant and Castle station which caused a large plume of smoke to billow over south London.

London Fire Brigade said shortly before 4pm that the fire close to Elephant and Castle station was “under control”, but its crews will remain in place “for the next few hours to dampen down the scene”. Dozens of police cars and ambulances also attended the blaze.

Footage moments after the fire had begun showed a police officer carrying two children out of a restaurant complex in Elephant Road, just yards away from where the outbreak began.

Following 30 flood closures in the last decade, this innovative £3.6m project will reduce disruption and improve passengers’ journeys on the Cambrian Line.

For the first time ever, a railway bridge in Wales has been raised away from rising river waters to prevent flooding on the track.

Black Bridge, on the Cambrian Line, near Machynlleth, now stands one metre taller than before, after Network Rail engineers and contractors AmcoGiffen worked day and night to lift it away from a river flood zone.

The Horncastle History and Heritage Society will open their exhibition which commemorates the 50th anniversary of the closure of the railway to Horncastle in July.

Following the success of the exhibition, held virtually because of COVID-19, the real exhibition will set to open from July 29 to September 4, 2021.

Lockdown restrictions prevented Horncastle History and Heritage Society opening their planned exhibition on the exact closure anniversary. Instead, a virtual exhibition presented new information, together with material from the Society’s extensive railway archive.

Hammersmith and City Line: Minor delays due to train cancellations.