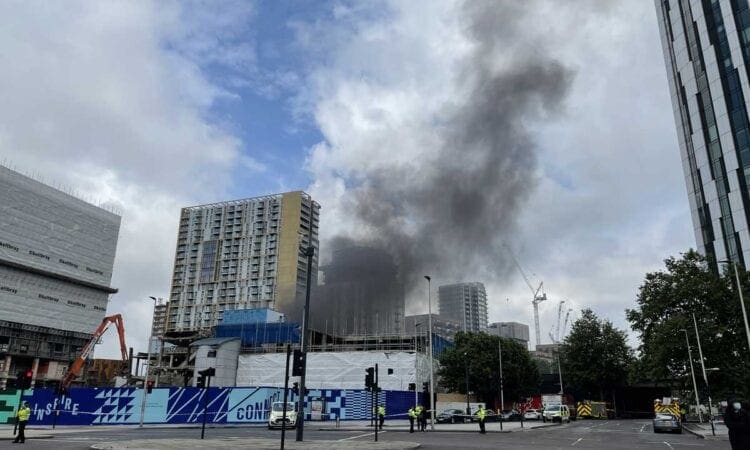 Around 100 firefighters battled a huge blaze close to Elephant and Castle station which caused a large plume of smoke to billow over south London.

London Fire Brigade said shortly before 4pm that the fire close to Elephant and Castle station was “under control”, but its crews will remain in place “for the next few hours to dampen down the scene”.

Early video from the scene of the blaze at railway arches in #ElephantCastle. We have 10 fire engines & 70 firefighters attending & have taken nearly fifty 999 calls. Please avoid the area https://t.co/L6NNuDfThB

Dozens of police cars and ambulances also attended the blaze.

Footage moments after the fire had begun showed a police officer carrying two children out of a restaurant complex in Elephant Road, just yards away from where the outbreak began.

A video of the fire posted on social media showed an explosion leading to a burst of flames.

Abdullah Safi, 21, who works at Chatkhara restaurant, was on his way to a Sainsbury’s near the station when he saw the flames.

He said: “I saw so much smoke. The fire was burning so high, about 50ft, so I started recording on my phone.

“Suddenly there was a big explosion, so I ran away. I ran back to my restaurant. I wasn’t hurt or anything. I’ve never felt so much heat and so much smoke at once.

“I’ve never seen something that big – I was scared. And it exploded twice.”

London Ambulance Service confirmed six people ended up being treated at the scene, with one being taken to hospital

Onlookers said firefighters were called to the railway arches under Elephant and Castle train station, where the fire was inside a car garage and spread to several cars and a telephone box outside of the garage.

It later ignited further, spreading to three other commercial units, the LFB said, and the railway station and nearby buildings were evacuated.

“The smoke that was created by that fire also affected the main Overground station of Elephant and Castle, which was subsequently closed as a precaution,” Mr Ryan said.

“We had five people who were in the address at the time, who left before the arrival of London Fire Brigade.”

Rail lines running through the station were closed, causing disruption to Thameslink and Southeastern services.

Northern Line trains on the London Underground were prevented from stopping at Elephant and Castle Tube station, but services later returned to normal.

People are being asked to avoid the area over the next two hours and residents should keep their windows and doors closed for the time being until the fire is fully extinguished.

A spokeswoman for the Metropolitan Police said: “Our officers were involved in a number of activities to keep the public safe and away from the area as well as supporting with evacuations. I believe this picture [of the officer carrying the children] was taken as officers were evacuating the local area where the fire broke out.”

A spokesman for Elephant and Castle Town Centre, the private body overseeing a major regeneration project near to the fire, said: “We are aware of the serious incident at Elephant and Castle this afternoon, which we understand originated in a railway arch unit adjacent to, but not forming part of, our development site.

“As a precaution all of the residents in our Elephant Central building, Castle Square retailers and operatives on the development site have been evacuated and we will continue to support the emergency services and other first responders wherever possible.”

Mayor of London Sadiq Khan said his thoughts were “with all those affected by the very serious fire” and thanked the emergency services for their work at the scene.