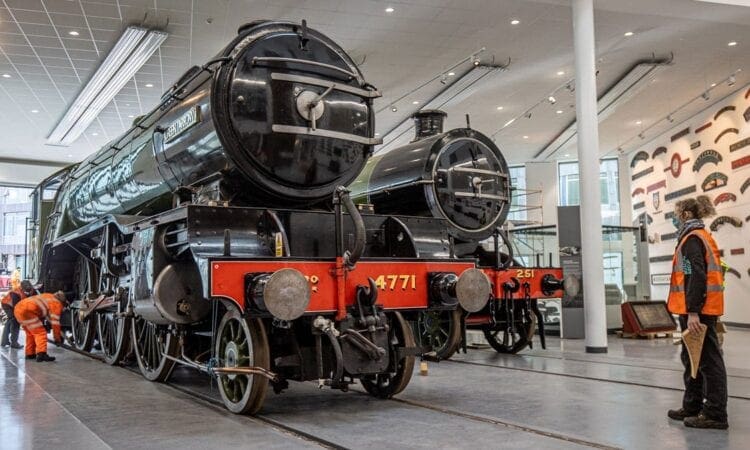 The pioneering locomotive Green Arrow has rolled back into Doncaster almost 75 years on since it left the famous Doncaster Plant Works.

Thanks to a partnership between the National Railway Museum and Doncaster Council, Green Arrow completes the line-up of locomotives in Danum Gallery, Library and Museum by joining No. 251 in a superb new rail heritage centre.

Together with an array of rare artefacts from the famous Doncaster Grammar School Railway Collection and other fascinating rail exhibits, the rail heritage centre will be a ‘must be seen’ exhibition when the building opens later this year, subject to the COVID-19 pandemic. Click here to find out more.

Weekend rail closures could be scrapped if demand for leisure travel surges when lockdown restrictions ease.

Network Rail chairman Sir Peter Hendy said there is “no point” in carrying out engineering work on dates when trains would be packed. His organisation normally carries out much of its maintenance and upgrade work requiring line closures over weekends and public holidays, to minimise the number of passengers affected. Click here to find out more.

Prime Minister Boris Johnson is facing calls to set the record straight after claiming there has not been a 40% cut to Transport for the North’s budget.

Board papers for the transport body, which aims to boost connectivity in the North of England, said core funding from the Government would drop from £10 million in 2020/21 to £6 million in 2021/22. Mr Johnson was asked by Labour former minister Dame Diana Johnson how the cut fitted with his plan for “levelling up” the North.

The Prime Minister replied: “There has been no such cut. We intend to invest massively in Northern Powerhouse Rail, in railways in the North and across the entire country.”

But this is contrary to a funding letter Transport for the North says it received from the Department for Transport on January 4, despite having requested further funding. Click here to find out more.

HS2 will not be a “rich man’s business class railway”, according to the boss of the firm developing the project.

Mark Thurston, chief executive of HS2 Ltd, said the ticketing structure will ensure trains can be used by “all working people”. The level of HS2 fares and whether trains will have first class compartments has not been decided. Click here to find out more.

Investigation launched into death of railway worker hit by train

He was one of four Network Rail personnel inspecting moveable sections of track between Surbiton and Weybridge. Here’s a statement from the RAIB.

The Railway Benefit Fund (RBF) is staging a week-long fundraising event designed to bring together the Railway Family in support of colleagues in need.

Railway Family Week, from April 26 to May 2, will feature a range of fundraising events to support rail workers across the UK.

The Railway Benefit Fund, founded in 1858, have introduced a fundraising challenge: aptly named The 1858 Challenge. Fundraisers can do it alone or together virtually with friends, colleagues and family as part of Railway Family Week. Click here to find out more.

Until Friday 26 February, late evening weekday trains at 2303 2333 and 0048 from Liverpool Street to Chingford will not run due to staff shortage.

As part of our ongoing investment to upgrade existing infrastructure, essential works will be taking place from 20:30 on Saturday 20 February until the end of service on Sunday 21 February.