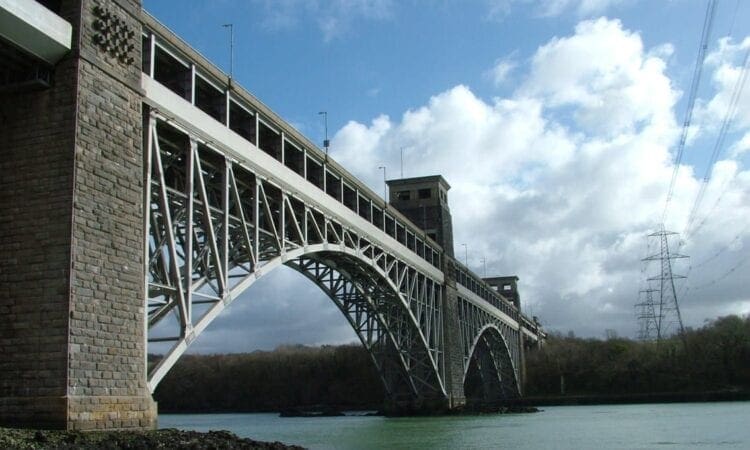 The three land towers on Britannia Bridge are set to receive refurbishment works from February 17, 2021.

Designed and built by Robert Stephenson in 1850, the Grade II listed bridge provides a vital rail and road connection between communities on Anglesey with mainland Wales.

The work will see support beams installed underneath the stone lintels at the top of the three towers along the bridge named: Anglesey, Britannia and Caernarfon.

The first stage of the work, which is being carried out on behalf of Network Rail by AmcoGiffen, will see scaffolding installed on the three towers during six weeknights. The dates are as follows:

In order for the work to be done safely and disruption kept to a minimum, one lane of the A55 will be closed between 19:00 and 05:00 during the six nights, as well as a temporary speed restriction of 40mph being in place on the bridge.

The scaffolding will be built up the sides of the towers from the rail deck level to help minimise disruption to traffic on the road. There will be no impact to rail services.

The next stage of the project will see 36 support beams, which are made from fibre-reinforced plastic (FRP), hoisted into position under the 24 stone lintels located at the top of the three towers. This additional support will ensure the bridge can continue to provide a safe and reliable transport link for this key route.

Kevin Collins, project director for Wales at Network Rail said: “This bridge is not only a critical transport link but also a famous part of the north Wales’ heritage and its landscape. These important works will help to keep it looking its best and doing its job for generations to come.”

Ken Skates MS, Minister for Economy, Transport and North Wales said: “This work is of vital importance and I am grateful to Network Rail and AmcoGiffen for their sensitive approach to minimising the disruption to road and rail traffic across the Britannia Bridge.

“It will ensure the well-known structure can continue carrying out its duty of connecting Ynys Mon and the Welsh mainland.”